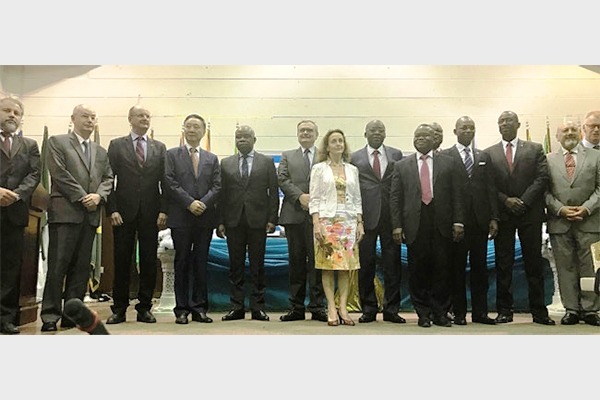 The United Nations Office for South-South Cooperation and the Government of Benin, through its Ministry of Planning and Development, convened the first of three subregional South-South and triangular cooperation capacity-building workshops in Cotonou, Benin. The workshop took place from 21 to 23 February 2017.

The Hon. Mr. Abdoulaye Tchane, Minister of State for Planning and Development of the Republic of Benin, opened the workshop. Over 200 people, most of them from government departments and academia, attended the opening session.

The objective of the first day of the workshop was for West African countries to exchange their experiences and knowledge on institutional and programme management of South-South and triangular cooperation with countries and inter-governmental institutions from outside Africa. The second and third days were dedicated to discussions among African countries towards developing an action plan for follow-up that UNOSSC can support.

The workshop highlighted the intention of UNOSSC to scale up its engagement with Africa. The invitation to the workshop was extended to all national South-South focal points in West African countries, based on UNOSSC databases and through UNDP Country Office assistance. In addition to West African countries, Kenya also participated since it has stepped forward to host the East African Workshop in May 2017. A Southern African workshop is in the planning stages.

During deliberations on the first day of the workshop, the role of public private partnerships in development emerged as a strong focus from several presenters.

Benin noted that most of its identified projects are funded by the private sector. It highlighted the general development spirit that embraces public-private partnerships, noting that even ambassadors are now development agents – searching for and gathering good practices and experiences. In that regard, the representative of the Benin Ministry of Planning and Development emphasized that safeguarding investments is a key component of development cooperation.

The representative of Thailand noted that the Thai Government is focusing on an enhanced partnership among public-private-civic society entities, among others, to be supportive of each other. The private sector in Thailand learning how to help with community development.

The workshop concluded with delegates emphasizing, among other things, the need for a resolution on a common regional currency, free movement of goods and people, a fund for South-South cooperation in the African region, and initiatives focusing on women and youth.

Delegates also noted major threats to South-South cooperation including lack of security, governance issues, and the lack of training and information flows to implementers of policy.

On strengthening the institutional set-up for South-South cooperation, participants asked UNOSSC to compile a more robust database of focal points in the missions in New York and in capitals.

The workshop was also very successful for matching those seeking and supplying development solutions. For example, Brazil, Thailand and Bangladesh are now consulting with authorities in Benin to launch cooperation projects. In addition, the Office of the Prime Minister of the People’s Republic of Bangladesh, which worked with UNDP on innovation in public service delivery, commenced discussions with UNDP Benin on the possibility of working together.