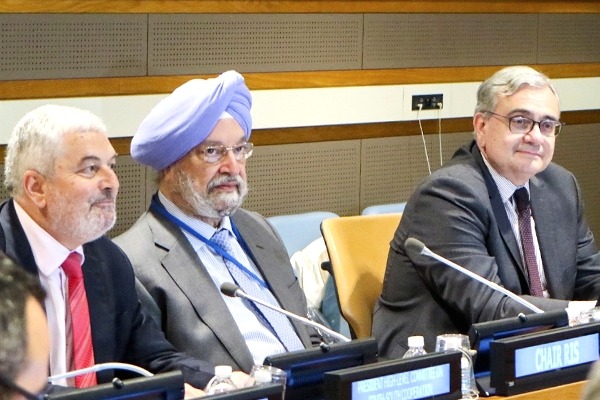 New York, 14 July – UN Development Programme (UNDP) and the Research of Information System (RIS) for Developing Countries (the Secretariat for the Network of Southern Think Tanks – NeST) signed a Memorandum of Understanding (MoU) to establish a strategic partnership to promote frontier thinking and mutual learning on South-South Cooperation.

This new partnership aims to advance research, knowledge and policy advocacy generated under the “South-South Global Thinkers: The Global Coalition of Think Tank Networks for South-South Cooperation,” a joint initiative between UNDP and the UN Office for South-South cooperation. The knowledge and research generated from the Global Coalition is expected to inform global policy dialogues on South-South and triangular Cooperation, including the upcoming 40th Anniversary of Buenos Aires Plan of Action (BAPA+40).

“RIS is anchored in the philosophy and work of development and South-South Cooperation. We will continue to cooperate with UNDP to create impact,” stated Ambassador Hardeep S. Puri, Chairperson of RIS.
“The world will be meeting in Argentina in early 2019 to commemorate the 40th anniversary of the signing of the Buenos Aires Plan of Action,” said Jorge Chediek, Envoy of the Secretary-General on South-South Cooperation and Director, UNOSSC. He further added “BAPA+40 will be a vehicle to relaunch South-South cooperation worldwide and within the United Nations system. This network will inform our work in the lead up to and during the High-level Conference.”

During the event, NeST representatives discussed the importance of developing, testing and the steady application of monitoring and evaluation approaches that are specifically tailored to the principles and conduct of South-South and Triangular Cooperation. Such performance measurements aim to support strategic decisions by relevant actors to improve effectiveness of South-South Cooperation.

Ms. Xiaojun Grace Wang, Deputy Director, UNOSSC, concluded the session by stating “Impact assessment of South-South cooperation needs to reflect the principles and perspectives of Southern partnerships. We count on the diverse views, evidence-based studies, and inclusive discussion with the think tanks community to shed light on how to maximize the development benefits of South-South cooperation.”