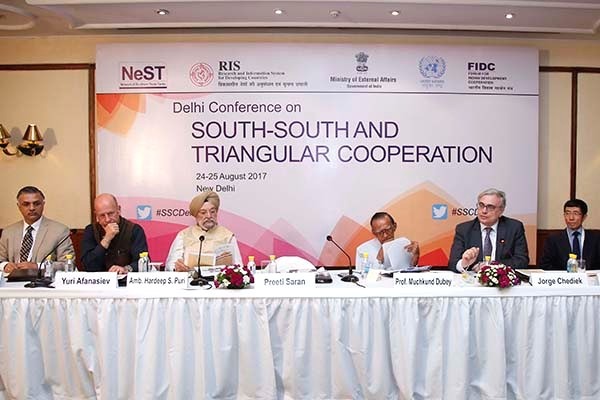 “Following the recent approval by United Nations Member States of the modalities resolution for the organization of the Buenos Aires Plan of Action+40 (BAPA+40) conference to be held in 2019, think-tanks, civil society and governments all are critical actors that must contribute to the shaping of the South-South cooperation agenda for the years to come, and to articulating the framework for its implementation and thriving” – affirmed Mr. Chediek.

41 think-tanks from across the global South are participating in this two-day conference, including the members of the Network of Southern Think-tanks (NEST), as well as additional universities and research centers.

Ambassador Hardeep S. Puri, Chairperson of the Research and Information System for Developing Countries (RIS) a think-tank affiliated with the Ministry of External Affairs of India, and the lead co-organizer of the event tasked Mr. Chediek: “as you go back to New York, advocate for all of us among key United Nations leaders, stressing that South-South cooperation is not only alive and kicking, it has enormously expanded in recent years and it is currently shaping the world and progress towards sustainable development.” – requested H.E. Puri.