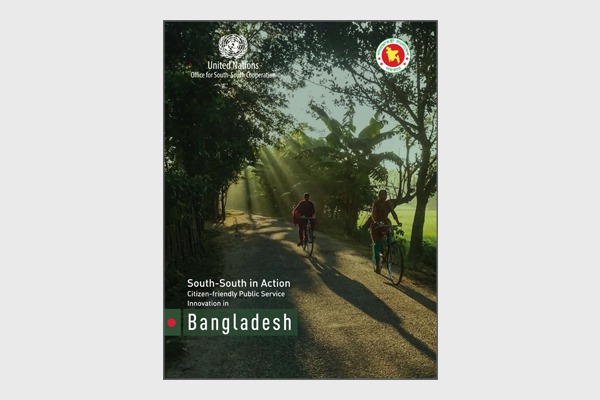 In his first address at the UN General Assembly in 1974, Father of the Nation Bangabandhu Sheikh Mujibur Rahman spoke passionately about the need for countries to come together to build “…a world where human creativity and the great achievement of our age in science and technology will be able to shape a better future…based upon a sharing of technology and resources on a global scale so that people everywhere can begin to enjoy the minimum conditions of a decent life.”

Forty odd years later, the meteoric rise of the Global South, both in terms of trade and human development, is now being accompanied by increased calls for countries facing similar underlying development challenges to learn from, and support one another.

Bangladesh is honoured to contribute its story of Socioeconomic development on the world stage in this series of UNOSSC publications. In the last eight and half years, Bangladesh has established a new development paradigm through its strategy of domestic demand generation as it confronted the global financial crisis.

Behind this strategy lies the goal of poverty eradication in one of the most populous, least developed countries of the world. Especially a country which has emerged from the ruins of a cruel liberation war. The objective paid us rich dividends and we are now determined to end poverty in the country by 2024 well ahead of the SDG target of 2030.

Most of the SDGs have already been mainstreamed into our national development plans. A high powered, dedicated unit under the guidance of the Honourable Prime Minister has been established to spearhead the process of coordinating the work of all stakeholders and creating synergy. With ‘Digital Bangladesh’ as a driving national agenda, our goal is to cement our status as a strong middle-income country by 2021 and realize a Bangabandhu’s long cherished dream of a ‘Golden Bangladesh’ by 2041.

Bangladesh wishes to dedicate this publication to the memory of Bangabandhu Sheikh Mujibur Rahman, whose ideals are the eternal inspiration behind our country emerging as a ‘development surprise’ and a shining example for countries throughout the world as it continues to disrupt traditional, linear development models and innovate a novel, alternative pathway for socioeconomic progress.

The United Nations Office for South-South Cooperation presents the second publication in the South-South in Action series with the Government of the People’s Republic of Bangladesh. This publication on Bangladesh’s experiences in development is special in the context of South-South cooperation. Bangladesh is generally considered one of the smaller countries in South Asia.

However, this publication captures the massive gains made by the country despite challenges ranging from pre-independence war, the world’s densest population and frequent natural disasters. Bangladesh met most of the Millennium Development Goal targets well ahead of schedule and its economy has grown at an average rate of 6 per cent per annum. Through experimentation and innovation in the areas of poverty reduction, disaster mitigation and economic management, Bangladesh’s role in innovation gained momentum and respect from development partners over the years.

In the last decade, Bangladesh borrowed ideas from other countries, adapted them and scaled up implementation to benefit millions of its 161 million citizens in the area of public service innovations. The gains from these innovations are quantifiable in terms of time and resources. The innovations described in this publication show the potency of digitized public service reforms in meeting the Sustainable Development Goals, especially Goals 16 and 17.

This publication illustrates the central tenet of South-South cooperation, which to some is only a politically correct statement, that all countries have something to offer. Bangladesh has plenty to offer and more.

The case studies included will enable the reader to easily adapt what was done and to seek technical assistance from the people best qualified to provide it in Bangladesh. Furthermore, the publication shows that sharing knowledge with Bangladesh is a worthwhile investment. In the case of public service reforms, the country borrowed pieces of innovation from many partners to develop a wholesome programme that many developing countries are now adapting.

In the publication, Bangladesh also presents a model or South-South cycle from adaptation to diffusion of experiences akin to the project cycle. I congratulate Bangladesh on this very useful contribution to South-South cooperation and hope that you will find it as interesting as I did.