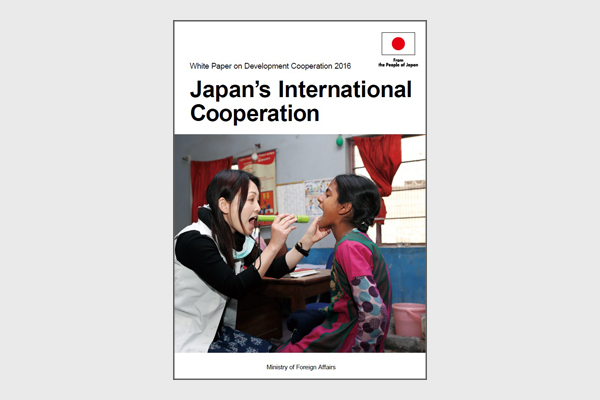 Last year was critically important and carried heavy responsibility for Japan’s diplomacy, but it was also a significant year from the viewpoint of Japan’s development cooperation.

Holding the G7 Presidency, Japan affirmed our strong commitment to tackle ever more serious global issues and lead efforts for further contribution to peace and stability as well as prosperity of the international society. Japan advanced collaboration between humanitarian assistance and development cooperation for reconstruction in order to make substantial ODA contribution, particularly in response to the refugees and migrants stemming from the crisis in Syria. In August 2016, Japan co-organized the Sixth Tokyo International Conference on African Development (TICAD VI) in Kenya—for the first time on African soil. Following the end of the Cold War, international attention on Africa has been in decline yet the launch of this initiative by Japan demonstrated our willingness to play a leading role in refocusing priority on Africa. Last year’s conference, the sixth since the first conference was held in 1993, reaffirmed that Africa still has high expectations from Japan. Furthermore, 2016 was the first year implementing the 2030 Agenda for Sustainable Development adopted at the United Nations in 2015. Japan launched the SDGs Promotion Headquarters comprised of all Cabinet members, and is taking initiative in achieving the goals of the Agenda. By seriously addressing issues vital to international society, Japan can show a leading presence in the world and strengthen its credibility. Last year’s efforts reinforced that ODA is an important diplomatic tool to forge significant international contribution, a notion we have held for a long time.

Peace and stability in the world and economic growth in developing countries have direct impacts on Japan. From the perspective of Proactive Contribution to Peace based on the principle of international cooperation, Japan’s contribution through ODA to find solutions for the challenges facing the international society also means securing Japan’s national interests. Based on this understanding, in 2015 the Cabinet decided the Development Cooperation Charter, Japan’s new development cooperation guidelines tailored to address changes in the international environment. The trust placed in Japan by developing countries rests on our development cooperation over the past 60 years, in which Japan, as a partner on equal standing with counterpart countries, placed the spotlight on all people including the socially vulnerable, and customized its support to match their needs. This basic concept of ODA will not change under the new Charter. Japan will simultaneously develop “quality infrastructure” by drawing on its expertise and technologies, which in turn will lead to “quality growth” in developing countries and growth of the Japanese economy. It is also essential to implement cooperation that will promote two-way economic growth. In this regard, it will become even more necessary to collaborate with diverse parties, including private companies, local governments, and NGOs.

Looking back on this past year, this White Paper provides an introduction to the contributions Japan made during the G7 Presidency, and the path Japan has taken under its Development Cooperation Charter. ODA is an important tool, both for fulfilling Japan’s responsibility in international society and for promoting the national interests of Japan. Therefore, Japan needs to further evolve ODA. On the other hand, the Government of Japan’s severe fiscal situation and domestic challenges are a reality, meaning ODA often faces harsh criticism. Thus the Ministry of Foreign Affairs has responsibility to carefully explain the activities and significance of ODA to the Japanese people, and gain their understanding and support in making more strategic and effective use of ODA. We will continue these efforts ceaselessly to realize diplomacy that goes together with the Japanese people.

I sincerely hope that this White Paper will help in this endeavor.