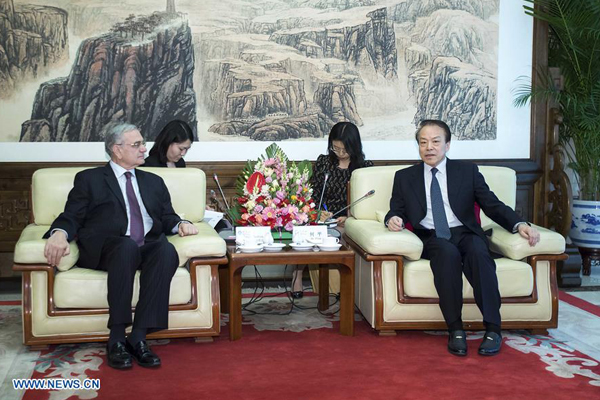 He Ping (R), editor-in-chief of Xinhua News Agency, meets with Jorge Chediek, Director of the United Nations Office for South-South Cooperation (UNOSSC) and Envoy of the Secretary-General on South-South Cooperation (SSC), in Beijing, capital of China, May 29, 2018. The two sides also signed a memorandum of understanding on bilateral cooperation. (Xinhua/Li Tao)

BEIJING, May 29 (Xinhua) — Xinhua News Agency and the United Nations Office for South-South Cooperation (UNOSSC) on Tuesday signed a memorandum of understanding in Beijing to advance cooperation.

Editor-in-chief of Xinhua News Agency He Ping and Jorge Chediek, the UN secretary-general’s envoy on South-South cooperation and director of UNOSSC signed the memorandum.

During their meeting, He said South-South cooperation was a great initiative of partnership and self-improvement for developing countries.

“As the biggest developing country in the world, China has always been an active advocator and an important participant,” He said. “Xinhua News Agency has always attached great importance to the role that South-South cooperation played in promoting global development, and has conducted a series of fruitful cooperation with the UNOSSC.”

He called on both sides to use the memorandum as an opportunity to open a new chapter of bilateral cooperation.

Chediek hailed China’s reform and opening up in working to eliminate poverty and realize modernization.

Chediek spoke highly of Xinhua’s role in showing the world the perspectives of China and countries of the South. He said that UNOSSC viewed Xinhua as an important strategic partner, and stood ready to develop and deepen cooperation with the news agency.