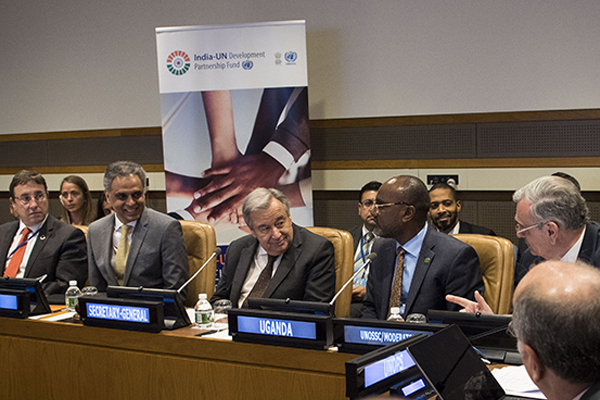 22 projects have been approved in 25 partner countries

The India-UN Development Partnership Fund, established by the Government of India to work with developing countries in a spirit of South-South cooperation, has forged partnerships with 25 partner countries on 22 development projects during its first year. The United Nations Office of South-South Cooperation (UNOSSC) manages the Fund.

“The Fund shows a further deepening of South-South cooperation, an increasingly valuable dimension of our work for development,” the Secretary-General emphasized. “The Fund focus on supporting people in Least Developed Countries (LDCs), Landlocked Developing Countries (LLDCs) and Small Island Developing States (SIDS) reflects our ambition to help those left furthest behind and to reach them first.”

The Government of India has committed $100 million over the next decade to the Fund, to support projects that are in alignment with the 2030 Agenda. It adheres to the principles of South-South cooperation, and places a priority on national ownership and leadership, equality, sustainability, development of local capacity, and mutual benefit.

For example, a Climate Early Warning System is being implemented in 7 Pacific Island Countries to increase resilience to natural disasters; a governance project in Swaziland will engage citizens in the collection of data on poverty in order to inform sound public policies; a climate-response project in Chad will help restore degraded lands and enhance agricultural production systems; and a governance project in Uruguay will enhance the government’s public service delivery through digital processing and monitoring tools.

“We in India are acutely aware of the development challenges facing countries of the South, ” said H.E. Mr. Syed Akbaruddin, Permanent Representative of India to the United Nations. He went on to challenge the United Nations to speed up their processes of project implementation.

In April 2018, the Government of India established a separate Commonwealth Window under the India-UN Development Partnership Fund aimed at partnership with developing countries in the Commonwealth. Under this window, an additional sum of $50 million over the next five years has been committed for partnerships with developing country members of the Commonwealth. Projects supporting biomedical waste management in Grenada, clean energy in Tuvalu and census data collection in Vanuatu have been approved under this window.

“The India-UN Development Partnership Fund exemplifies South-South cooperation at work,” said H.E. Mr. Adonia Ayebare, Permanent Representative of Uganda and President of the High-level Committee on South-South Cooperation. “India is putting into practice what we have been discussing for so long.”

“The speed at which projects have been implemented through the Fund is impressive,” said Mr. Achim Steiner, Administrator, United Nations Development Programme. “The best ideas, from wherever they are sourced, should be made accessible to everyone on the planet.”

“UNOPS is honoured to be called to the table by India and UNOSSC,” said Ms. Grete Faremo, Executive Director, United Nations Office for Project Services. “We stand ready to work closely with you to implement projects of the Fund.”

H.E. Mr. Walton Alfonso Webson, Permanent Representative of Antigua and Barbuda, conveyed the appreciation of LDCs, LLDCs and SIDS, for India’s “timing and response to countries requests”. “India’s climate leadership is exemplary,” he stressed. “We cannot achieve the SDGs without international support.”

“We do not have the luxury to waste time, ” said H.E. Ms Fekitamoeloa Katoa Utoikamanu, High Representative for the LDCs, LLDCs and SIDS. “The Fund’s focus on unlocking the potential of the people in the most vulnerable countries could not be more timely.”

Mr. Jorge Chediek, UNOSSC Director, and Envoy of the Secretary-General on South-South Cooperation, moderated the event, which was attended by United Nations officials and over 45 Permanent Representatives.

Information about the Anniversary Commemoration:

For more information, or to schedule media interviews, please contact: