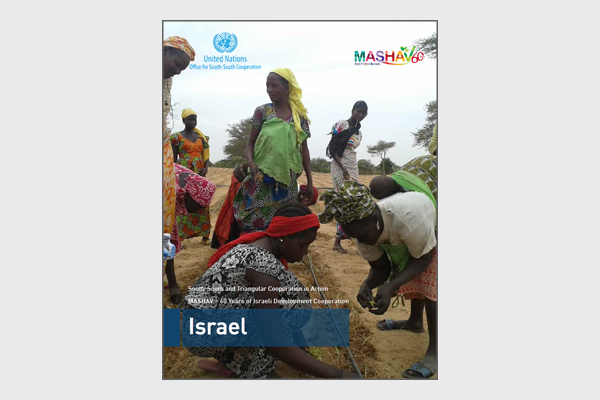 It is with great pride that I present to you this publication, on the auspicious occasion of the 60th anniversary of MASHAV, the Israeli international development and aid agency.

Just imagine the scope and depth of vision of Foreign Minister Golda Meir and Prime Minister David Ben Gurion, when they decided, during the last days of 1957, while the State of Israel itself was still very much attempting to find its own way within the global scene, to establish an Israeli Bureau for International Development Cooperation. Those were days of economic austerity and hardship for the young nation of Israel, which was struggling to establish a viable and stable economy, nevertheless, the philosophical-Jewish trait of “Tikun Olam” (healing the world), coupled with a unique and genuine geo-political outlook, resulted in the formation of an Israeli aid and
development agency. One can only look back with full admiration at the founding fathers and mothers of our nation for this commendable act.

Years later, as we mark six exciting decades of Israeli aid and development activity worldwide, we feel fully entitled to be proud. The State of Israel, as a member of the family of nations, has proven itself to be a committed actor, fulfilling its international responsibility as part of global efforts to achieve sustainable development and contribute to the fight against poverty. Supporting those who face great development challenges worldwide, while leaving no one behind, goes to the heart of what it means to be a Jewish State.

The Israeli experience of extremely rapid development taught us that solutions to these challenges lie, first and foremost, in human resources. To that end and throughout its history, MASHAV focused its many development activities on human capacity building, including the “training of trainers”
approach, as a means to reach and empower the grass roots level of communities and nations in need. MASHAV has always placed people at the heart of its development activity.

Since its establishment, and based on the belief that human development should be unconditional, MASHAV has trained close to 300,000 rofessionals from over 140 countries across the globe, some of which have limited or no diplomatic relations with Israel. MASHAV has been, and continues to be, a manifestation of Israel’s diplomatic and foreign policy approach of bringing Israeli goodwill to every human being in need, regardless of nationality,
religion, race, age, gender or distance.

MASHAV is proud to mount the flag of the State of Israel throughout the world, and as President Reuven Rivlin stated “MASHAV is Israel and Israel is MASHAV”.

This is an opportunity to reaffirm and strengthen Israel’s commitment to continue our efforts to develop innovative and affordable technologies and solutions, and to share our knowledge and expertise, inspiring and supporting fellow nations, communities and individuals in their struggle to improve their livelihoods.

Recent decades have seen significant shifts in the global development landscape. One of those changes has been the evolution of some developing countries into partners well positioned to share their home-grown experience and practical knowledge. These countries have successfully addressed their own development challenges and are eager to share their successes with the world.

The State of Israel is one such country. Since gaining its independence in 1948, Israel has transformed from a developing country to a high-tech advanced economy. It achieved this through supporting scientific research, the development of human resources, and making use of new and innovative technologies.

Many of the solutions that spearheaded Israel’s development are presented in this edition of South-South and Triangular Cooperation in Action, which I am pleased to present in partnership with MASHAV. Over the past 60 years of its operations, MASHAV – Israel’s Agency for International Development
Cooperation – has taken these solutions and made them available to other countries.

What is noteworthy is the extent to which Israel’s development cooperation today is in line with many of the principles of South-South and triangular  cooperation. MASHAV is putting into practice the belief of David Ben-Gurion, Israel’s first prime minister, that “…the principles of mutual assistance and equality should also constitute the basis for international relations between people”. Its programmes are demand-driven and aligned
with partner countries’ national priorities. There is an explicit focus on sharing accumulated expertise through technical assistance, capacity building, and training. Shalom Clubs – the MASHAV alumni association –
help to facilitate ongoing exchange between countries and across regions.
The demand-driven transfer of these solutions, through North-South, South-South and triangular cooperation modalities, is contributing to the attainment of the 2030 Agenda and other internationally agreed development goals.