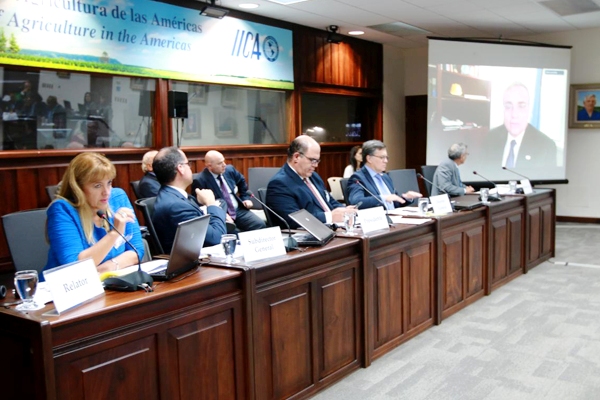 San Jose, 18 July 2018 (IICA). The Inter-American Institute for Cooperation on Agriculture (IICA) and the United Nations Office for South-South Cooperation (UNOSSC) signed a Memorandum of Understanding to join efforts for the benefit of agricultural development, rural well-being, environmental conservation and poverty reduction in the hemisphere.

The memorandum was signed by the Director General of IICA, Manuel Otero, and the Director of UNOSSC and Envoy of the Secretary-General on South-South Cooperation, Jorge Chediek, who participated, via teleconference, in the Thirty-eighth Regular Meeting of the Executive Committee of the Institute, held in San Jose, Costa Rica.

In his address to the representatives of the 17 countries present at the meeting of the Executive Committee, one of the governing bodies of IICA, Chediek highlighted the Institute’s history, results and projection with respect to South-South Cooperation, and pledged to ensure that the partnership would generate great returns in the Americas and the rest of the world.

“Throughout its history, as well as in the present, IICA has proven to be an institution that is a model for successful South-South cooperation. It is a pleasure to have IICA form part of our network of partnerships. The activities that the Institute carries out in the Americas can be quite valuable in other parts of the world, and our global mandate justifies building these bridges. We will ensure the successful operation of this partnership in order to improve the Americas and create a better world,” stated Chediek.

The IICA-UNOSSC Memorandum of Understanding seeks to contribute to poverty reduction; prevent natural disasters and assist the rural sector in its recovery efforts; preserve the environment; foster joint work aimed at achieving the Sustainable Development Goals; and promote South-South Cooperation and triangular cooperation among its member countries as well as with other developing countries.

“I am certain that this agreement will serve as a platform that will enable us to learn as well as to drive joint work with this key institution of the United Nations. Horizontal cooperation, in all its forms, must be a key topic in order to put into practice the notion of IICA as a bridge: a bridge that unites regions, issues and countries, allowing for knowledge to be managed and to flow in the best possible manner,” stated Otero.

During the Executive Committee meeting, the Institute also signed general cooperation agreements of varying scope with the Organization of Eastern Caribbean States (OECS); the General Secretariat of the Andean Community (CAN); the General Directorate of Multilateral Cooperation (DIGECOOM) of the Ministry of Economy, Planning and Development of the Dominican Republic; the Pan American Development Foundation (PADF); the Latin American Faculty of Social Sciences (FLACSO); and the University for Peace (UPEACE).