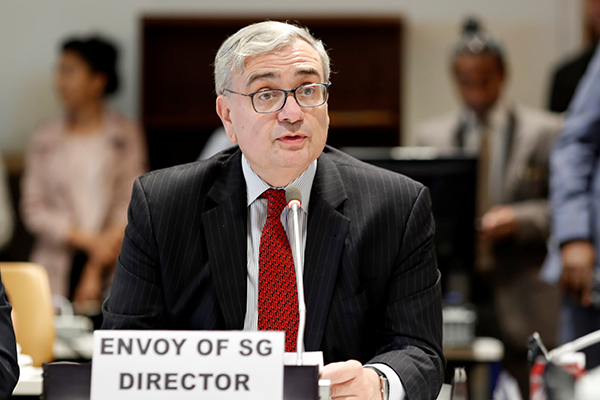 Today, 12 September, the international community commemorates United Nations Day for South-South Cooperation. This is an important acknowledgement of the contributions of Southern partnerships in addressing the many development challenges that confront the international community, such as poverty, climate change, inequality, contagious diseases and humanitarian crises.

This year’s commemoration is particularly significant, as it marks the fortieth anniversary of an important milestone in international cooperation – the adoption of the Buenos Aires Plan of Action for Technical Cooperation Amongst Developing Countries (BAPA). BAPA institutionalized cooperation amongst developing countries, creating a strategic framework for furthering cooperation in technical and economic areas.

But cooperation amongst developing countries did not begin forty years ago – it traces its origins to the anti-colonial solidarity movement of the twentieth century. The practice gained further popularity in the 1950’s and 1970’s as newly independent States with limited capacities looked for independent ways to accelerate their development, away from the Cold War dichotomy of the day.

Forty years after the adoption of BAPA, the international system is undergoing a major systemic transformation, with new pillars of growth and influence emerging from the global South. Through collective voice and action, developing countries are actively contributing to the building of a more prosperous and peaceful world.

Developing countries today account for the largest share of global economic output and are playing an active, constructive role in traditional institutions of global governance as well as creating new institutions that are Southern-led.

In a noteworthy trend, development solutions increasingly originate from developing countries themselves. Harnessing the abundance of innovative solutions, brought about by its economic growth and advances in technical competencies, the global South now charts its own unique development path.

Southern-based centres of excellence and knowledge hubs have become key vehicles for promoting mutual learning, leading to reduction of poverty and the growth of an emerging middle class. With this newly formed confidence, the global South progressively looks within itself for ideas, knowledge and skills for tackling many of its common challenges. This enhances its national and collective self-reliance, a major objective of BAPA.

As a consequence, interregional forums and summits for dialogue amongst developing countries have become an important platform for enhancing South-South policy coordination, launching joint initiatives, and committing resources for infrastructure development, trade and investments – vital for ensuring sustainable development.

Triangular cooperation – Southern-driven partnerships between two or more developing countries, supported by developed countries or multilateral organizations – is increasingly playing a role to ensure equity in partnership and scaling up of success.

In light of this, the United Nations General Assembly has decided to commemorate the fortieth anniversary of the adoption of BAPA by convening a High-level conference (BAPA+40) to be held from 19-21 March 2019 in Buenos Aires, Argentina. BAPA+40 provides a great opportunity for the international community to further strengthen and invigorate cooperation amongst developing countries.

Although great strides have been made by developing countries in improving the living conditions of millions of its people, complex development challenges still persist. Global economic transformations and its corresponding consequences on production patterns present a particular challenge to developing countries. Automation poses a great risk to job creation in the South; climate change has particularly adverse effects on Small Island Developing States and Least Developed Countries; traditional partnership models are re-evaluated and inequality continues to rise. The global South will play an important role in overcoming these challenges.

The United Nations system continues to support the collaborative initiatives of developing countries by advocating, catalysing, brokering and facilitating such collaborations across many spheres. Drawing on its vast presence across the global South, the United Nations is well placed to identify development capacities and gaps existing in developing countries while collecting, analysing and disseminating best practices and lessons learned towards the implementation of the 2030 Agenda for Sustainable Development and other internationally agreed development goals.

As the international community enters the third year of the implementation of the 2030 Agenda, concrete development solutions and resources from the global South are critical to achieving the Sustainable Development Goals. Effective development solutions that have worked in a few countries of the global South can be scaled up through South-South cooperation and triangular cooperation to accelerate sustainable development, particularly in countries that are lagging behind.

More and better South-South cooperation is essential to building a better world that leaves no one behind.

About the author: Mr. Jorge Chediek is UNOSSC Director and Envoy of the Secretary-General on South-South Cooperation.