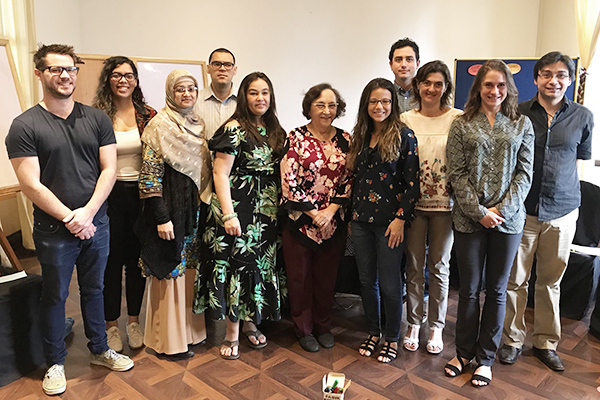 South-South cooperation has manifested in a variety of ways – one of the most powerful being that of knowledge exchange.

In order to give greater visibility and support to Southern knowledge on the peace, development and security nexus, the United Nations Office for South-South Cooperation recently facilitated the formation of a thematic community of practice focused on Peace and Development. Representatives of the group participated in an inaugural joint analysis workshop held in Antigua, Guatemala from 5 to 6 October.

The South-South Peace and Development Thinkers group currently comprises over 20 researchers across 10 think-tanks from Latina America, Africa, and the Middle East. The initial group of researchers are existing members of the South-South Global Thinkers – the global coalition of think tank networks for South-South cooperation, a joint initiative of UNOSSC and UNDP.

Embodying the principles of ownership and non-conditionality, solidarity and horizontal exchange, the South-South Peace and Development Thinkers group envisions a world where countries in the Global South enjoy more durable and just peace because global, regional, and national policies and programmes are effectively informed by their cutting-edge, locally grounded research and policy analysis.

Over the two days of joint analysis, the eight participants identified similarities and differences across their regions, and agreed upon plans to investigate the compatibility of South-South cooperation and peace and development objectives. Given that Southern voices are often underrepresented in global policymaking arenas, this working group provides the platform for think-tanks to showcase their existing range of work (which covers topics including indigenous peacebuilding, mediation, peacekeeping, the role of women and youth, and environmental security while simultaneously contributing to a much broader discussion on the role of South-South cooperation in peace and development.

Over the next few months, the group will work together to produce several knowledge products which they will present at the 2018 Global South-South Development Expo and beyond.

As Member States recognize the increasing importance of issues of peace in addressing development challenges, the proposed research outputs of this group have the potential to feed into the upcoming BAPA+40 High-Level Conference in Buenos Aires – placing renewed focus on creating Southern solutions to Southern challenges.

For more information on the group’s Theory of Change, its formation, and its current membership and objectives, please click here. The group’s dedicated on-line site is accessible here.