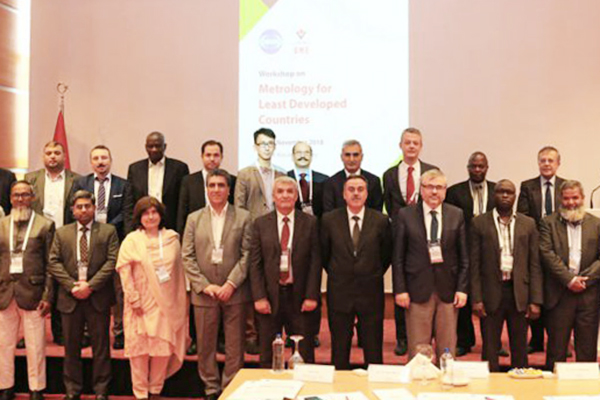 The Workshop on Metrology for the Least Developed Countries was successfully held on 26 – 27 November 2018, in Gebze-Kocaeli, Turkey. The workshop was jointly organized by the Commission on Science and Technology for Sustainable Development in the South (COMSATS) and the TUBITAK National Metrology Institute (TUBITAK UME), Turkey.

The primary objective of the workshop was to enhance the knowledge-base, expertise and capacity of the institutions working in the field of metrology in the least developed countries, as well as to prepare roadmaps towards addressing their needs to develop metrology infrastructures with the capability of supporting their economies.

Hosted by TUBITAK National Metrology Institute, the workshop was attended by about 30 participants belonging to Tanzania, Senegal, Bangladesh, Gambia, Uganda, Pakistan, Iran, Jordan, Sri Lanka, Kazakhstan, Libya, Turkey and Austria. Apart from the officials of COMSATS Headquarters, the workshop was attended by officials belonging to the World Bank and the United Nations Industrial Development Organization (UNIDO).

The workshop was inaugurated by Dr. Mustafa Çetintaş, Director TÜBİTAK UME, Turkey. He delivered the message of H.E. Dr. Hasan Mandal, President of The Scientific and Technological Research Council of Turkey (TUBITAK), Turkey. In his message, Dr. Mandal welcomed the foreign and local participants. He stated that metrology and quality infrastructure is critically important for the developing countries, which have applications in various fields including healthcare, public safety, environment, etc. The same can help the developing countries in manufacturing products for international and domestic markets and to improve the quality of life of their citizens. He shed light on the expertise of TUBITAK UME, which was established in 1992, and has over 200 researchers. He informed that Turkish exports increased six times during 1994 to 2015 due to the national quality infrastructure. He stated that Turkey, particularly TUBITAK, is ready to help other developing and least developed countries in upgrading their metrology infrastructure and human resource development.

During his opening remarks delivered via Skype, Dr. S. M. Junaid Zaidi, Executive Director COMSATS, shed light on the significance of metrology, standardization and quality infrastructure, which can help the developing and least developed countries in achieving industrial and economic development. He admired the progress made by Turkey in the afore-mentioned fields and hoped that the participants would be able to fully benefit from the expertise of TUBITAK UME and would replicate the same in their respective countries. He also shed light on the possible role of international organizations in facilitating the upgradation of metrology sectors and quality infrastructure in the countries of the South. He thanked TUBITAK UME for hosting the event and for providing warm hospitality to its participants.

The technical sessions of the workshop were preceded by the detailed presentation by Dr. Mustafa Çetintaş, Director TÜBİTAK UME, Turkey, on the status of Metrology in Turkey. Mr. Erkut Kırmızıoğlu, General Directorate for Standards and Metrology, Turkey, covered the Transformation of Turkey’s Legal Metrology System. Dr. Hüseyin Uğur, Consultant, World Bank, made a presentation on how Metrology Infrastructure can be developed in LDCs, while Mr. Pablo Davila, Industrial Development Officer, Standards and Quality Infrastructure Division, United Nations Industrial Development Organization (UNIDO), Austria, delivered UNIDO Perspective on Development of Quality Infrastructure in LDCs. It was noted that UNIDO has extended support to Sri Lanka, Mozambique, Nigeria and Iraq in building their National Metrology Institutes. UNIDO also extends support in capacity building and human resource development in the related fields.

These presentations highlighted the existing strengths/resources (manpower and technical infrastructure) as well as needs of the participating countries in the fields related to quality infrastructure, including Metrology, Standards, Accreditation and Conformity Assessment.

During the discussion session, the participants exchanged knowledge and know-how regarding various segments of quality infrastructure. Subsequently, the participants were divided into the following five working groups in order to prepare recommendations and roadmaps for upgradation of metrology sectors in the collaborating countries: (i) Funding for Development of Metrology; (ii) Traceability of Standards; (iii) Know-how Transfer; (iv) Creating Public Awareness about Metrology among Stakeholders; and (v) Human Resource Development and Knowledge Management.

The broad roadmap developed by the participants for the upgradation of metrology and quality infrastructure in the developing and least developed countries is given below:

Other recommendations related to upgradation of quality infrastructure included: adequate financial support of the governments to metrology institutes; strengthening of Academia-Industry linkages; periodic briefings by heads of metrology institutes to policy makers in order to keep them abreast of the developments and to seek their support; involvement of private sector; proper role of media in highlighting the significance of these sectors; continuous capacity building opportunities to the manpower, etc.

While discussing the way forward, it was agreed that TUBITAK UME (with support from COMSATS) would conduct a survey among the participating countries in order to determine their common national needs of quality infrastructure. Subsequently, the participants would prepare proposals for joint projects in order to garner support from international agencies.