BAPA+40 Side Event: Maximizing the role of South-South cooperation in achieving Universal Health Coverage and Elimination of Mother-to-Child Transmission of HIV & Syphilis 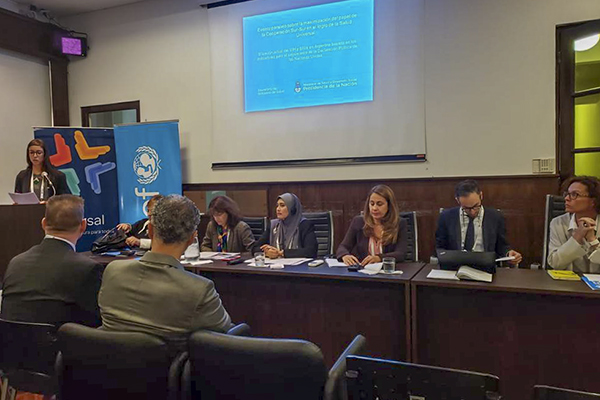 On 21 March 2019, on the margins of the second UN High-Level Conference on South-South Cooperation, UNICEF, PAHO/WHO hosted a dialogue on how to maximize the role of South-South cooperation to achieve Universal Health Coverage and eliminate mother-to-child transmission (EMTCT) of HIV & Syphilis, moderated by the Ministry of Health of Brazil. Cuba and Malaysia shared their experiences in successfully eliminating mother-to-child transmission of HIV & syphilis which was certified by WHO certification in 2015 and 2018 respectively. Both countries shared reflections on how good practices, lessons learned and technical expertise could be more widely shared regionally and globally through South-South cooperation. Achieving EMTCT and Universal Health Coverage are important targets of the Sustainable Development Goals and should be part of national and international SSC core program working areas. Malaysia underlined the value of their experience for other Muslim countries. Cuba, being the first country in the world to certify HIV/syphilis elimination expressed its willingness to assist other countries to accelerate towards the goal in a sustainable way. Both organizations PAHO/WHO and UNICEF shared the lessons learned from the small islands in the Caribbean that were successful as models to be replicated when it comes to small population. PAHO/WHO also emphasized that strong primary health care working in integrated networks, one of the four key strategies to achieve Universal Health, is also a key success factor to achieve and sustain disease elimination.

Thailand, as the second country in the world that successfully eliminated MTCT, and the first in Asia. It also offered to cooperate with other countries in achieving the same, including through regional intergovernmental bodies such as ASEAN.

UNICEF confirmed its commitment to South-South cooperation, its determination to support countries in their efforts to achieve the SDGs, which includes ensuring a future generation of children free of HIV.