At BAPA+40, UNESCO and the India-UN Fund launch projects benefiting The Gambia and Togo 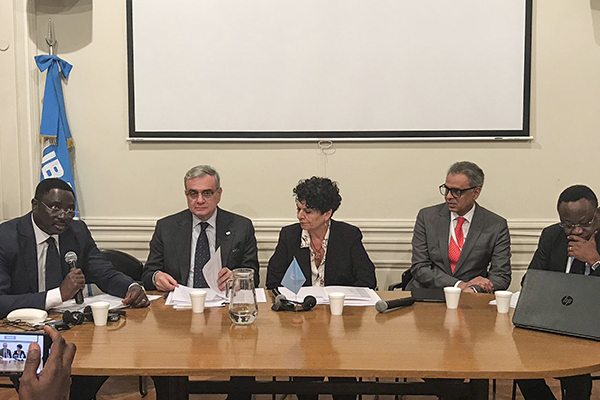 As world leaders meet in Buenos Aires to provide impetus for South-South cooperation and shape its complementary role within the 2030 Agenda for Sustainable Development, the India-UN Fund launched new projects with the governments of The Gambia and Togo. In a signing ceremony held during a side-event to the Second United Nations High-level Conference on South-South Cooperation (BAPA+40) these two projects were approved.

The initiative Using Drones and Early Warning Systems for Pre- and Post-Floods Disaster Management in the Gambia Drones establishes an end-to-end flood warning system by introducing state of the art technology and building national networks and capacities to rapidly identify risks and damages.
“As a country laying entirely within a river basin, the support of India and UNESCO are key to ensure our scientific and technical preparedness to mitigate and avoid flood disasters” affirmed Hon. Mamadou Tangara, Minister of Foreign Affairs, International Cooperation and Gambians Abroad. “This project shows the highly practical and impactful nature of South-South partnerships”.

The project “Sustainable Development through Biodiversity-friendly Livelihoods – Supporting Rural Communities in the Vicinity of Fazao-Malfakassa National Park” in Togo, stimulates and diversifies the local economy by supporting youth and women entrepreneurship in biodiversity related livelihoods, such as beekeeping, snail rearing, mushroom farming or eco-tourism.
H.E. Christophe Akpoto, Director of Bilateral Cooperation at the Minsitry of Development Planning and International Cooperation of Togo commented on the importance of this project in developing sustainable livelihoods for local populations. He looked forward to its implementation so that it can start quickly having impact in the lives of 1,500 rural entrepreneurs.

These are the first two projects under the India-UN Fund to begin implementation through UNESCO. They were formulated by the government of The Gambia and Togo in line with their national priorities and benefitting from UNESCO’s technical and administrative support and generous funding by the Government of India.

“The Indian adage —the whole world is one family— is the inspiration behind India’s support to the India-UN Development Partnership Fund” stated H.E. Syed Akbaruddin, Permanent Representative of India to the UN in New York. “These initiatives for Togo and The Gambia represent two of four projects already approved by this Fund for implementation by UNESCO. We thank UNESCO for their expeditious formulation of these initiatives. This signing ceremony at BAPA+40 signifies India’s much broader and continued response to the development cooperation requests driven by our partner countries.”

“These projects show the key role of science and scientific cooperation to enable countries to make strides in their sustainable development. South-South cooperation is superbly well positioned to unleash the potential of scientific solutions across the global South” stated Ms. Lidia Brito, Director, UNESCO Office in Montevideo.

The signing ceremony followed a panel discussion on “South-South Cooperation in UNESCO Biosphere Reserves: Transboundary cooperation for sustainable livelihoods, green economies and conservation”, an official side-event of BAPA+40, in partnership with the University of Buenos Aires.