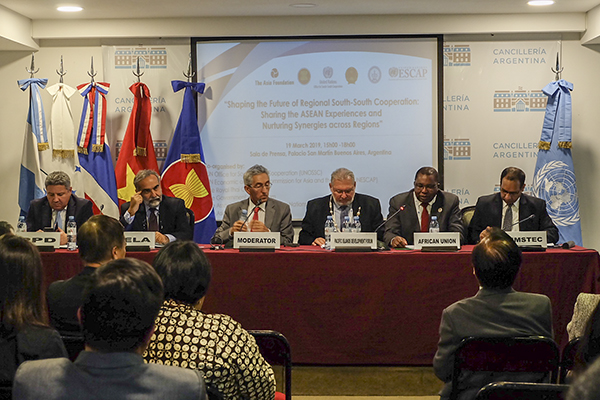 The side-event on “Shaping the Future of Regional South-South Cooperation: Sharing the ASEAN Experiences and Nurturing Synergies across Regions” was held on 19 March at Sala de Prensa, Palacio San Martín, Buenos Aires, Argentina. The event was co-organised by the UN Office for South-South Cooperation (UNOSSC), the UN Economic and Social Commission for Asia and the Pacific (UNESCAP), the Royal Thai Government, the Government of Viet Nam, the Association of Southeast Asian Nations (ASEAN) Secretariat, and the Asia Foundation. The event took place on the side-lines of the Second High-level United Nations Conference on South-South Cooperation (BAPA+40 Conference).

Ms. Xiaojun Grace Wang, Deputy Director of UNOSSC opened the event and underlined UNOSSC’s commitment to join hands with Member States, regional institutions, and the UN family, especially the Regional Commissions and other partners in nurturing partnerships and inter-regional dialogue towards  scaling up partnerships for the future of South-South and triangular cooperation.

Ms. Fekitamoeloa Katoa ‘Utoikamanu,  the United Nations High Representative for the Least Developed Countries, Landlocked Developing Countries and Small Island Developing States (UN-OHRLLS) and UN Under-Secretary General highlighted that “South-South cooperation is a step forward for regionalisation.” She emphasised the importance and need for sustainable partnerships in the LDCs, LLDCs, and SIDS to address development challenges.”

Ms. Armida Salsiah Alisjahbana, the Executive Secretary of the United Nations Economic and Social Commission for Asia and the Pacific (ESCAP) and UN Under Secretary-General stated that “ASEAN is a living example of South-South cooperation and architect of development cooperation.” Relating to her organisation, she said, “ESCAP has supported South-South cooperation at regional and sub regional level for the past seventy years and is committed to joining forces to achieve the inclusive sustainable development.”

During the first session panellists discussed ASEAN’s coordination and development experiences in the context of regional South-South cooperation. H.E. Mr. Vijavat Isarabhakdi, Special Envoy of the Minister of Foreign Affairs of the Kingdom of Thailand; Mr. Nguyen Hoai Nam, Deputy Director-General, Ministry of Foreign Affairs of Viet Nam; and senior representatives from the ASEAN Secretariat and ESCAP constituted the first panel.

As the current ASEAN Chair, Thailand highlighted its priority to “advance partnership for sustainability”. To this end, Thailand has launched initiatives that support development cooperation through South-South and triangular cooperation, especially the “Complementarities Initiative”, a study undertaken to identify common areas between the ASEAN Community Vision 2025 and the UN 2030 Agenda for Sustainable Development. Furthermore, Thailand will establish the ASEAN Centre for Sustainable Development Studies and Dialogue (ACSDSD) this November.

Viet Nam as the incoming Chair of ASEAN in 2020, emphasised the importance of development and South-South cooperation as vital to narrowing the inequality within and between the ASEAN Member States and other countries in the region. Looking ahead, the panel discussed the need for an inclusive engagement with non-state actors, from private sector, NGOs and civil society organisations to drive the plurality of regional South-South cooperation in ASEAN. In addition, the audience raised the question of the fourth wave of industrialization and the much needed response for the development challenges of the LDCs, LLDCs and SIDS, to which the panel discussed the vitality of capacity-building and skills transfer in areas of economic reform, education, agriculture development, environmental protection, social progress and job creation.

High-level representatives from eight regional and intergovernmental institutions, namely the African Union (AU), the Latin American and Caribbean Economic System (SELA), the Pacific Islands Development Forum (PIDF), the African, Caribbean and Pacific Group of States (ACP), the Bay of Bengal Initiative for Multi-Sectoral and Technical Economic Cooperation (BIMSTEC), and Partners in Population and Development (PPD) constituted the second panel. The  Director of the South Centre moderated the discussion. The panel recognised the merits of regional South-South and triangular cooperation which have been instrumental in driving regional integration and addressing region-specific development challenges ranging from sustainable development, poverty eradication, climate change, disaster management, peace-building, trade and investment facilitation, connectivity, technology transfer and capacity-building. Looking ahead, the panel called for continued inter-regional dialogue among regional organisations to scale up South-South and triangular cooperation in the post BAPA+40.