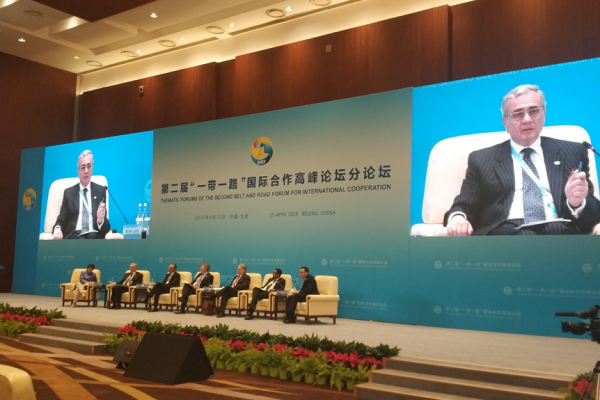 UNOSSC Director and Envoy of Secretary-General on South-South Cooperation, Mr. Jorge Chediek, at the invitation of Ministry of Commerce of China, attended the Thematic Forum on Trade Connectivity of the Second Belt and Road Forum on 25 April 2019.

Mr. Chediek delivered a speech at the onset of the thematic discussion on improving business environment for sustainable development. He alerted about the negative impact resulted by market forces if they are left unregulated. First, “from environmental perspective, we are consuming more resources than the planet can provide us with.” Second, market forces, if left unsupervised, is highly likely to worsen the economic inequality.

A global report published in 2018 was referred in his speech demonstrating that 43 people have more wealth than 3.8 billion people, which equals to say that people seating in the first two rows of the conference room have more money than three times the population of China.

He assured that market forces needs to be regulated but the dilemma is how to strike a balance between the space that we have to give to market forces for them to create and the space we need to regulate the excesses; but there is a consensus among all that there is way to develop economy while not challenging the lives of the more than 1.3 billion population who live under poverty line.

He praised the experience of China. The example of the economic growth that China has achieved over the past forty years is inspiring and provides hope to other developing countries. “We strongly support a partnership that can be an example for the rest of the world.”

He called for all to take opportunity of Belt and Road Forum as a platform to share good practices and knowledge of South-South cooperation, recalling the second United Nations high-level conference on South-South cooperation in Buenos Aires where participants shared experiences in how to work with private sector, experiences in new technologies, the forth industrialization and etc.

This forum is entitled “Deepening Trade Connectivity under the Belt and Road Cooperation through Openness, Inclusiveness and Innovation” and guided by the principle of “wide consultation, joint contribution and shared benefits to promote unimpeded trade and achieve win-win development.”

It accommodated three topics in the thematic discussion session. Deepening multilateral and bilateral trade and economic cooperation for greater openness and integration, developing new trade forms for innovation-driven growth, and improving business environment for sustainable development. Mr. Chediek engaged in the discussion of the third topic moderated by Ms. Arancha Gonzales, Executive Director of the International Trade Center, joined by the Trade and Industry Minister of The Philippines, Trade Minister of New Zealand, Foreign Minister of Greece, Finance Minister of Ethiopia and Finance Minister of Kazakhstan.