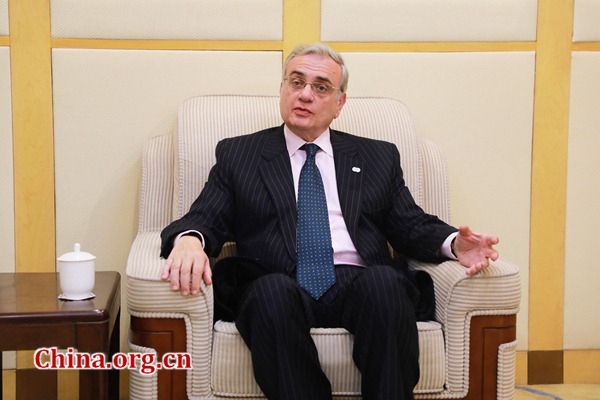 Jorge Chediek, the director of the UN Office for South-South Cooperation, is interviewed by China.org.cn on April 23, 2019. [Photo by Bai Yunzhi / China.org.cn]

China is a model for the developing countries, and the Belt and Road Initiative provides the rest of the world with the opportunity to share in China’s great experiences, a top UN official said in Beijing last Tuesday.

Jorge Chediek, the director of the UN Office for South-South Cooperation, indicated in an exclusive interview with China.org.cn that since the launch of reform and opening-up 40 years ago, China has achieved one of the most extraordinary successes in the history of humankind, raising over 700 million people out of poverty. Under the leadership of President Xi Jinping, the Belt and Road Initiative opens a possibility for others to take advantage of China’s wealth of experience.

The Belt and Road Initiative leaves a lot of flexibility for participating countries to design their own measures to engage in the partnership, so most of the criticisms that have been aimed at the initiative are based on misunderstandings. “Our vision is that those criticisms that are being addressed fail to take full account of the positive effect that the initiative is having, and how it will help the world.” Chediek added.

China’s experience in agriculture is directly relevant to the realities of many African countries. Africa is the continent with the highest proportion of population still living in rural areas. China has achieved so many successes in improving the agricultural output its villages, gaining access to markets, and achieving better lives through the utilization of new technologies… These are exactly what Africa needs. They have a lot of collaboration in these particular fields. “It is really an extraordinary initiative,” Chediek stressed.

Talking about the specific cooperation between China and African countries, Chediek mentioned a video “Simple Technology, Big Harvest” co-produced by China.org.cn and China Agriculture University, which tells the story of a China-Tanzania joint program to scale up maize production and boost farming incomes. “What I saw in that video is a manifestation of how this type of cooperation can change the world for the better. Small changes can produce extraordinary results. And that experience shows how important, how valuable cooperation can be to the South, and China can be for the development of Africa and the rest of the world,” he said.

In terms of the future of South-South cooperation, Chediek pointed out that more countries of the South, and especially China as the biggest of those countries, should engage more. China is on the right path with initiatives like the Belt and Road. “The obligations taken on by this great country are also a call for the world to do more-not only governments, but also the private sector, civil society, and academia.”