Strengthening Cooperation and Partnerships with TICA 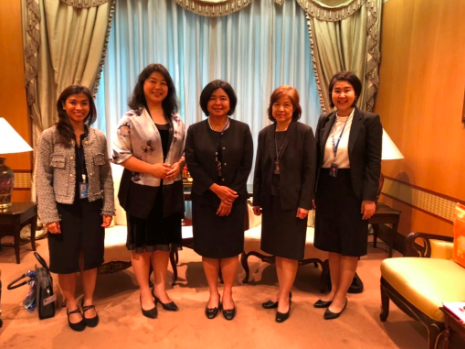 On 10 June 2019, Ms. Xiaojun Grace Wang, UNOSSC Deputy Director for Programme and Operations, paid a courtesy call on Ms. Pattarat Hongtong, Director-General of Thailand International Cooperation Agency (TICA) on the occasion of Ms. Hongtong’s new appointment as TICA’s Director-General, at Ministry of Foreign Affairs of the Kingdom of Thailand, Bangkok.

UNOSSC expressed sincere thanks for the continuous support offered by the Government of Thailand to South-South cooperation agenda and to the office. Both sides discussed existing and new initiatives, including supporting a global knowledge sharing and partnership platform — South-South Galaxy and the compilation of Good Practices in South-South and triangular cooperation for sustainable development, to further strengthen cooperation between and among countries in ASEAN and the wider Asia-Pacific. Among others, emphasis was made on institutional capacity development of international cooperation agencies. Under Thailand’s current ASEAN Chairmanship of 2019, TICA invited UNOSSC to collaborate on the upcoming Directors-General Forum of ASEAN Countries on Development Cooperation to be hosted by TICA around later this year. The design of the mentioned Forum was based on the Buenos Aires outcome document of the BAPA+40 Conference, and Resolution 75/3 “Advancing partnerships within and across regions for the sustainable development of Asia and the Pacific” adopted by the Economic and Social Commission for Asia and the Pacific (ESCAP).


@UNOSSC Supports @UNESCO and G77 dialogue on SSC in Africa promoting education, science & technology in the context of SDGs. pic.twitter.com/r20MzMk71x


APC-Colombia Workshop for technicians of national entities and territories on South-South cooperation and its contribution to Agenda 2030 and SDGs
- Tuesday, September 12
- Bogota, Colombia