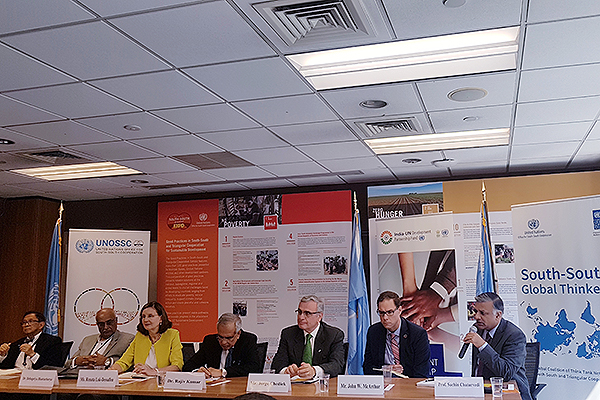 With rising aspirations linked to the Sustainable Development Goals (SDGs), commitments of developing countries have multiplied. However, at the operational level major challenges remain, including the effective management of capital inflows; domestic resource mobilization; and addressing the problems of capital flight. Developing countries are also challenged by the inadequacy of long-term development finance; poor infrastructure; inadequate industrialization and also in developing resilience to climate change. Emergence of new institutions to complement existing institutions is a crucial development in this regard.

In this context, a side-event on “Financing of SDGs” was organized, under the South-South Global Thinkers Initiative, to discuss the challenges faced by developing countries with regards to capital flight; specific needs in areas like industrialization, SMEs, trade facilitation, capacity creation, addressing the gender gap, renewable energy and sustainable urbanization. The event was co-organized by the United Nations Office for South-South Cooperation (UNOSSC), the South Centre and an Indian think tank – Research and Information System for Developing Countries (RIS).

The newly adopted BAPA+40 Outcome Document helps increase the scope of South-South cooperation (SSC) by laying down the principles of SSC and recognizing important areas such as trade, investments, finance and technology transfer with further importance, clarity and diction. It also notes the urgency to tackle corruption and illicit financial flows that impede economic development, deepen income inequality, and reduce domestic resource mobilization for sustainable development in developing countries. To address these issues, greater South-South and triangular cooperation (SSC and TrC) have been encouraged, including the sharing of knowledge and best practices to prevent and combat corruption and illicit financial flows.The Outcome Document also mentions the need tocreate an enabling environment to strengthen Micro, Small and Medium Enterprises (MSMEs) and design implementable strategies to help them grow and thrive. It also recognizes the need to mobilize adequate resources from all sources – including public, private, domestic and international – for enhancing SSC and TrC.

Mr. Jorge Chediek, Director of UNOSSC and Envoy of the Secretary-General on South-South Cooperation, stressed the financing gap for implementation of the SDGs and noted that SSC can be the subject of action for governments, Civil Society Organizations (CSOs), private sector, NGOs, academia and a wide-range of stakeholders in mobilizing resources, knowledge and technical know-how.

Participants noted that currently there is a 5-7 trillion dollar financing gap for implementation of the SDGs of which 2 trillion is needed in developing countries. However, it was also acknowledged that the conversation globally on the lack of financing for SDGs hasn’t seen much progress in recent years. Some bottlenecks and challenges such as the lack of order in financing commitments; the changing landscape of development finance; systemic concerns on the poor state of the global financial architecture; and domestic resource mobilization were raised, among other important issues. There was general consensus that the global financial architecture is not built for purpose and remains one of the key barriers to adequate financing.

The role of multi-stakeholder engagement and innovations to address this gap were discussed at length. Innovative partnership funds such as the India-UN Development Partnership Fund were cited as effective ways of committing to the SSC and TrC agenda. The role of frugal innovations was also stressed, acknowledging that India has been a leader in this regard. Ms. Renata Lok-Dessallien, UN Resident Coordinator in India specifically pointed out that the role of the private sector and private philanthropy to step up to meet this gap in financing and innovation is extremely crucial. She also stressed on how modes of production, value chain and supply chains need to change and become more SDG focused.

The South is a highly heterogenous region and within the South, there has been the gradual development of a North that now has immense potential to lead by example. Dr. Rajiv Kumar, Vice-chairman of the National Institute for Transforming India (NITI) Aayog, stressed that there is great merit in assessing the capabilities that exist internally and asked what the South can do for itself. He also stressed that alongside the availability of financing, developing the ability to effectively spend that money is equally if not more important. The role of technology and big data in changing the needs of development finance still remain areas that have not been tapped into fully but may have tremendous opportunities for countries of the South. If used appropriately, the gains from technology and big data may lower the costs of development finance. For example, the application of big data in health sciences has lowered the costs of doing scientific research.