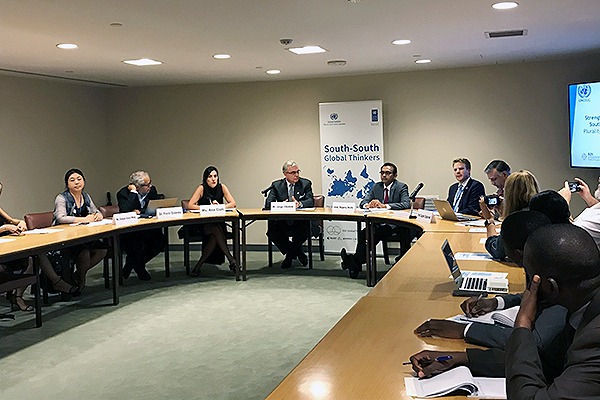 The newly adopted BAPA+40 Outcome Document makes significant contributions toward providing guidance for development partnerships in the paradigm of South-South cooperation (SSC) and triangular development cooperation (TrC) in alignment with the economic and political transitions that have taken place since the adoption of the Buenos Aires Plan of Action (BAPA) in 1978. In this context, the United Nations Office for South-South Cooperation (UNOSSC) and the Network of Southern Think Tanks (NeST) co-organized a High-Level Political Forum (HLFP) side-event titled, “Strengthening SDG 17 through South-South and Triangular Cooperation: Plurality and Way Forward from BAPA+40” inviting participation fromthe Government of India, the Government of Argentina, Permanent Missions to the United Nations, the OECD, and think tank network members.

This side-event invited reflections on the state of SSC/TrC in different regions through the sharing of regional experiences; an identification of the challenges for SSC/TrC in fulfilling Agenda 2030; and the discussion of the roadmap forward from BAPA+40.

There is general consensus regarding the dramatic changes that the South has undergone during the last decades. The last 40 years has seen intensified cooperation within and across the global South, with the emergence of developing countries as regional and global players. For example, there has been an intensification of South-South trade and South-South investment. The South has contributed more than half of global growth in recent years. The South has also pioneered many innovative development projects such as the India, Brazil, South Africa (IBSA) Fund – providing guidance to other Southern peers and important lessons for the North. In times of huge financing deficits globally, countries like China have continued to undertake risky investments in their Southern partners.

H.E Ambassador Nagaraj Naidu, Ambassador and Deputy Permanent Representative of the Permanent Mission of India to the United Nations, stressed that advancements and dynamism within and among countries of the South have opened up new opportunities and also dramatically changed the approach of the North to the South. He shared the successes of the IBSA Fund and India-UN Development Partnership Fund.

The existing challenges in addressing the SSC/TrC agenda were discussed by the participants. Professor Sachin Chaturvedi, Director General of the Research and Information System for Developing Countries (RIS) emphasized that most of the indicators under South-South cooperation are tier 3, meaning the methodologies are under contestation by various partners and for which there are no data. The challenges of methodologies and data, therefore, are major bottlenecks to any future advancement in the SSC agenda.

Participants stressed the need to start effectively reporting SSC; to start measuring and monitoring SSC initiatives; and to develop institutional frameworks, national and regional methodologies and approaches to report and monitor SSC initiatives.

The resistance against impact assessments was also noted. However, it was agreed that post BAPA+40, it is now crucial to concentrate efforts to draw convergence between the sensitivities in the political processes and the debates and recommendations in academia on the issues of measurement and impact assessment for example.

In this regard, the role of think tank networks in advancing the debate was noted and emphasized by UNOSSC Director and Envoy of the Secretary-General on South-South Cooperation, Jorge Chediek. With the BAPA+40 Outcome Document, he said, it is now time to move beyond planning and focus on implementation.