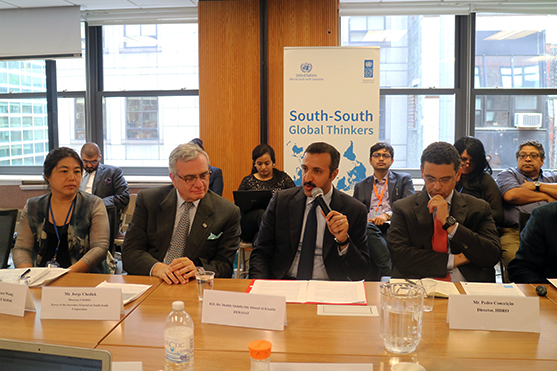 The meeting brought together over 13 Southern-based think tanks and many more engaged in an earlier e-discussionon the topic of inequality via the South-South Global Thinkers Platform.

In his opening remarks, Mr. Pedro Conceição, Director of HDRO stressed the importance of this event and how the 2019 HDR will “provide new lenses and an approach that is different from traditional ones of understanding inequality.”

UNOSSC Director and Envoy of the Secretary-General on South-South Cooperation, Mr. Jorge Chediek, and Deputy Director, Ms. Xiaojun Grace Wang, both highlighted how South-South cooperation can develop more effective partnerships to reduce the issue of inequality between and among countries.

H.E Dr. Shaikh Abdulla bin Ahmed Al Khalifa, Chairman of the Bahrain Centre for Strategic, International and Energy Studiesand Undersecretary for International Affairs at the Ministry of Foreign Affairs of the Kingdom of Bahrain, made a special intervention to discuss the steps taken in the Kingdom of Bahrain to tackle inequality. He credited three things: political willingness; a comprehensive reform to ensure equality irrespective of gender, religion, race, or other factors; and the existence of solid legislative structures and legal mechanisms.

The South-South Global Thinkers Network members presented their country and regional experiences, especially noting areas in which a reduction in inequality can have significant economic, social and political returns. However, Professor Sachin Chaturvedi, from the Research and Information System for Developing Countries (RIS)in India, indicated that Southern transformative solutions and efforts to address inequality are not as visible as Northern efforts.

Dr. Bhattacharya a Distinguished Fellow at the Centre for Policy Dialogue in Bangladeshstressed the importance of understanding the relationship between growth, inequality and voice; while Ms. Cai, from Development Alternatives with Women for a New Era, discussed the lack of indicators for measuring things like social norms and cultural values which can have a profound impact on issues such as health, gender equality, gender-based violence and educational attainment.

Dr. André de Mello e Souza, a senior researcher from the Institute for Applied Economic Researchin Brazil, noted that “trickle down effects have not been operating in Latin America, preventing growth from leading to poverty reduction. In addition, inequality can hurt the quality of democracy and political stability (…) What is needed is deeper change and structural transformation.”

Dr. Onyekwena, from the Center for the Study of the Economies of Africain Nigeria, discussed technology, which is likely to widen inequality especially in Africa, given the differential access to technology between countries.

Ms. Ngu Wah Win, from Centre for Economic and Social Development in Myanmar, noted that “Southeast Asian nations have broadened access to schooling and maintained relatively low unemployment, but inclusion in the growth process for a majority of the population increasingly depends on quality of education, skills and jobs”.

The meeting concluded with the sharing of expert insights on the issue of inequality, and recommendations to delve deeper into certain thematic issues such as governance, climate change, technology, gender, health, access to productive resources, social norms, and culture, among others. The issue of data challenges in adequately painting a picture of inequality was also discussed at length; the efforts of the 2019 HDR to go beyond traditional methodological approaches was highly appreciated across the table.