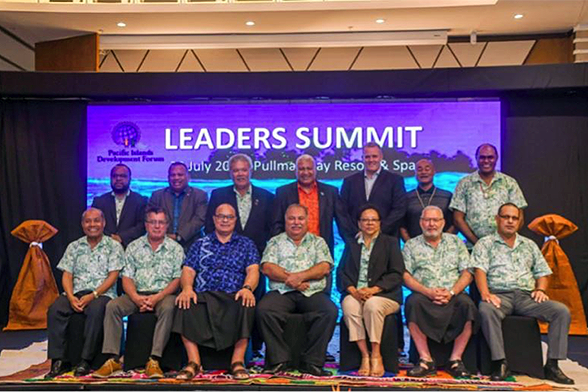 The participating leaders included the President of Nauru, Prime Ministers of Fiji and Tuvalu, as well as the Deputy Prime Minister of the Solomon Islands. These leaders strongly endorsed the role of South-South cooperation in the sustainable development of the Pacific.

“The theme for this conference [South-South cooperation for a resilient Pacific] provides the platform upon which we will explore new ways of thinking, working and forging new partnerships between and amongst ourselves and with our development partners to jointly pursue sustainable development and poverty eradication in the Pacific Islands,” said Hon. John Maneniaru, the Deputy Prime Minister of the Solomon Islands on behalf of the outgoing Chair of PIDF. He also emphasized that the Pacific would benefit from a multi-stakeholder partnership in building long-term prosperity for the region.

“Our theme is a very important one,” said the President of Nauru, H.E. Baron Waqa. “There is no doubt that our Islands are on the frontline of global challenges and that we face increasingly complex and more serious challenges.” He continued, “South-South cooperation has been gaining momentum in the Pacific ever since PIDF convened the Pacific consultation on South-South cooperation towards the Buenos Aires Plan of Action earlier in March… There is increasing recognition and widespread acceptance that South-South cooperation is an essential instrument for overcoming development challenges, and can effectively cut across sectors and across borders. In short, it has been credited to strengthen regional cooperation, power up trade, foreign direct investment, technology transfer and growth among other things”.

PIDF Member States and territories, representatives of the private sector, Non-governmental organizations, research institutes and academia as well as multilateral institutions participated in the two-day event. The event included the PIDF Leaders’ fourth Summit since the formation of PIDF in 2016.

The Conference was convened in line with the recommendations of the participants of the Pacific Islands consultation convened in the lead up to the Second United Nations High-level Conference on South-South Cooperation which took place in March. The consultative meeting was co-organised by PIDF and the United Nations Office for South-South Cooperation (UNOSSC). The Summit and Conference noted the importance of South-South and triangular cooperation in achieving sustainable development and implementing the 2030 Agenda.

In his closing remarks, the Prime Minister of Fiji and incoming Chair of the PIDF, Hon. Frank Bainimarama indicated that the incoming Secretary-General of PIDF will be asked to focus on the PIDF’s greatest competitive advantages, particularly, inclusivity through partnerships with civil society and the private sector, in reference to the multi-stakeholder approach agreed by Member States at the Second United Nations High-level Conference on South-South Cooperation. “That programme of institutional reform aligns well with the Meeting’s theme [of South-South Cooperation for a resilient Pacific]”, he added.

The Summit and Conference Outcome reflected the deep concern for the Pacific that was also highlighted by the new Chair of PIDF, Hon. Frank Bainimarama.  A Nadi Bay Declaration on the Climate Change Crisis in the Pacificwas endorsed by participants.The major partners that participated and delivered supporting remarks were representatives of the Governments of Argentina, the People’s Republic of China and India as well as the United Nations Office for South-South Cooperation.