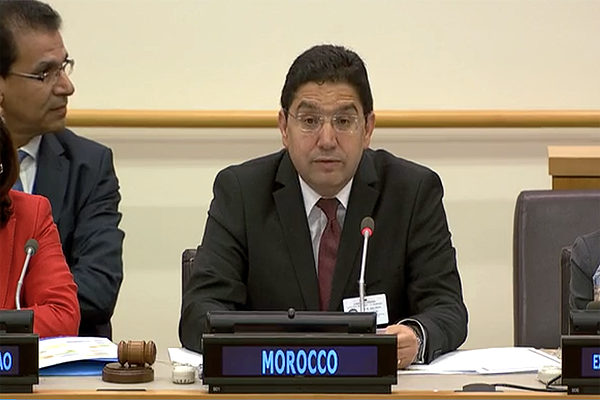 H.E. Mr. Nasser Bourita, Minister of Foreign Affairs and International Cooperation of the Kingdom of Morocco

On the sidelines of the World Sustainable Development Summit, the Kingdom of Morocco, the Food and Agriculture Organization of the United Nations (FAO), the United Nations Economic Commission for Africa (UNECA) and the African Development Bank (AfDB) organized a High-level Panel focusing on the theme: “Food Security and the achievement of SDGs in Africa: what role for South-South and triangular cooperation”.

“In Southern Africa 1 person in 5 suffer from malnutrition… and in 30 years, Africa’s population is expected to double,” said H.E. Mr. Nasser Bourita, Minister of Foreign Affairs and International Cooperation of the Kingdom of Morocco. “The agenda to eliminate hunger and poverty in the world recognizes the role of South-South cooperation,” he emphasized.

Recently, the FAO estimated that Africa is the region with the highest prevalence of undernourishment – affecting approximately 21% of its population (more than 256 million people). Africa spends more than $35 billion per year on food imports, and this figure is expected to reach $108 billion by 2025 if no concrete solution is reached.

The panel offered an opportunity to debate on food security challenges in a continent which is home to 50% of the world’s uncultivated arable lands and on the means by which African countries can reinforce their actions especially through the promotion of South-South cooperation, multi-stakeholder partnerships and the exchange of experience and know-how based on the support of their bilateral and multilateral partners.

Mr. Jorge Chediek, Director of UNOSSC and Envoy of the Secretary-General on South-South Cooperation, noted the relevance of the panel as it echoes the call of the Secretary-General on the international community to find new ways to combat climate crises. He also emphasized that during the panel participants would hear concrete actions taken by partners following the March United Nations High-level Conference on South-South Cooperation(BAPA+40) that confirmed how important this modality, together with triangular cooperation can be in achieving Agenda 2030.

Participants had an open dialogue regarding their homegrown policies – often based on the successful experiences of neighbors – which turned food security into a fundamental right supported by constitutional and juridical frameworks. Also discussed were projects and initiatives launched by African countries, their development partners and regional and international financial institutions to reinforce the contribution of South-South and triangular cooperation in food security-related matters and the implementation of the 2030 Agenda.

More than 256 million Africans go to bed hungry every night, said Ms. Vera Songwe, Executive Secretary of the United Nations Economic Commission for Africa (UNECA). “South-South cooperation can help,” she said, “What can we do differently?”

Mr. Akinwumi Adesina, President of the African Development Bank, said that the Bank plans to invest $25 billion in agricultural development over 10 years. Noting that Morocco is building resilient agriculture in the face of climate change, Mr. Akinwumi Adesina highlighted the successful South-South example of Morocco’s fertilizing sector that has now became a global example facilitating agricultural across African.

“Without partnership and South-South cooperation it would be difficult to achieve SDGs,” stressed Ms. Maria Helena Semedo, Deputy Director-General of FAO. “FAO is firmly committed to the BAPA+40 outcome document,” she noted, and announced that FAO will launch a South-South and Triangular Cooperation Gateway in November housing all success stories from around the world.

In the second segment of the programme, Ministers gave short testimonies of effective South-South cooperation in their work. These included:

Webcast of the event is available here: http://webtv.un.org/search/food-security-and-the-achievement-of-sdgs-in-africa-what-role-of-south-south-and-triangular-cooperation/6088837177001/?term=food%20security&sort=date