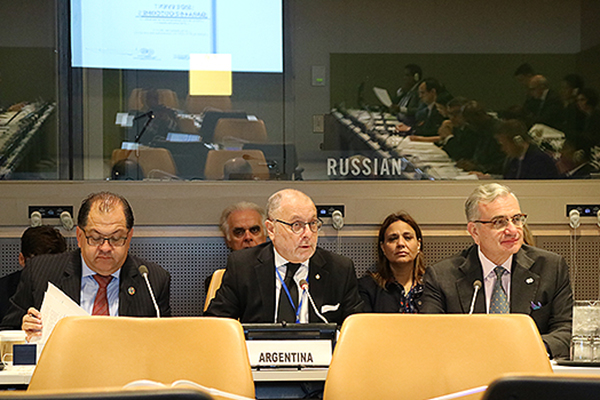 The first post BAPA+40 interactive dialogue took place on the sidelines of the High-level segment of the 74thSession of the UN General Assembly on 26 September. The dialogue was hosted by the Government of Argentina and UNOSSC, and focused on strengthening of the United Nations High-level Committee on South-South Cooperation and follow up to the main elements agreed upon in BAPA+40.

H.E. Mr. Jorge Faurie, Minister of Foreign Affairs and Worship of the Argentine Republic, emphasized that “the consensus reached through the final document is an unquestionable example of what we are able to achieve when we trust and bet on multilateralism.” In that sense, he offered congratulations for having agreed after months of negotiations “a programmatic document whose wealth lies in the convergence of diverse visions and interests that, when complemented, allow us to have a clearer horizon on the challenges and opportunities present in the field of international cooperation.”

Minister Faurie emphasized that South-South and triangular cooperation are some of the most efficient ways to collaborate. He said that as the High-level Committee on South-South Cooperation is a monitoring committee, we have to work on methodologies on how to implement South-South cooperation and how to collect data.

Mr. Luis Felipe López-Calva, UNDP Regional Director for Latin America and the Caribbean, delivered a statement on behalf of Mr. Achim Steiner, UNDP Administrator. He said that the BAPA+40 Conference, hosted by the Government of Argentina, recognized that the world had undergone a deep change. The responsibility is now on us to transform the commitments of BAPA+40 into reality, he said, noting that UNDP’s strategic plan recognized that South-South cooperation is an essential driver of the progress toward sustainable development. South-South and triangular cooperation are at the heart of UNDP operations at global, regional and country levels, he said. He also highlighted that UNDP is fully engaged in the development of the UN System-wide strategy on South-South and triangular cooperation being coordinated by UNOSSC.

Mr. Jorge Chediek, Director of the United Nations Office for South-South Cooperation and Envoy of the Secretary-General on South-South Cooperation said that UNOSSC is looking forward to suggestions, based on Member States experiences, on how to make the High-level Committee more effective so that the BAPA+40 agenda can become reality.

H.E. Mr. Riyad al-Maliki, Minister of Foreign Affairs of Palestine speaking on behalf of the Group of 77 and China, said that the South-South roadmap was never as important as it is today. The Group noted with appreciation expansion of intraregional and interregional South-South cooperation initiatives and summits, that have set strategies and agendas, enhanced coordination and launched joint ventures that strengthened South-South trade, investments, infrastructure development, and capacity development.

The H.E. Mr. Henry Okello Oryem, Minister of State for Foreign Affairs of Uganda, took the opportunity of the meeting to announce that Uganda will host the “Third South-South Summit” in 2020 in with an aim of strengthening South-South cooperation. He emphasized that strengthening the High-level Committee is vital for the full implementation of BAPA+40. This strengthening, he said, should focus on ensuring that the HLC’s regular sessions contribute to concrete action and support the full implementation of the agenda for sustainable development of developing countries. He reiterated the importance of supporting UNOSSC with financial and human resources toward strengthening the capacity of the Office to fulfill its mandate.

H.E. Mr. Aksel Jakobsen, State Secretary of the Ministry of Foreign Affairs of Norway, said that Norway is ready to take part in the implementation of the BAPA+40 outcome document. Norway is currently stepping up its efforts in the field of tax and domestic resource mobilization. He noted two key Norwegian institutions that specifically promote SSTrC: first is a knowledge bank that strengthens the competence and capacity of the public administrations; and second is the National Center of Excellence for Exchange Cooperation (NOREC) which offers training, guidance, and follow-up.

Mr. Miguel A. Moir, Secretary of Planning and Programming of Presidency of Guatemala, said that Guatemala highly values South-South and triangular cooperation, and as such is trying to leverage the modalities to align public policy with the 2030 priorities.