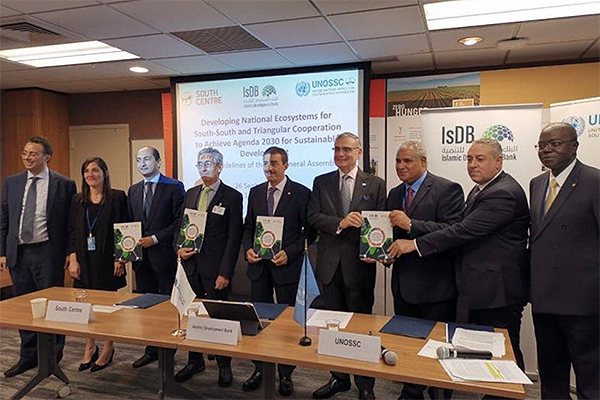 UNOSSC co-organized a meeting with the Islamic Development Bank and South Center on the sidelines of the 74th UN General Assembly 26 September.

Beginning the meeting a Statement of Intent was concluded between UNOSSC, the Islamic Development Bank (IsDB) and the South Centre (SC), where the parties agreed to work on a number of areas that address the recommendations outlined in the BAPA +40 outcome document, with an aim to:

Following the signed Statement of Intent, an IsDB’s the South Centre paper entitled “Developing National Ecosystems for South-South and Triangular Cooperation for Achieving agenda 2030 for Sustainable Development” was launched.

The preliminary outcomes of the paper were presented at BAPA+40 and received a wide endorsement. In the BAPA+40 Outcome Document, the need to strengthen institutional arrangements for SSTrC — i.e. national ecosystems — was specifically mentioned as a key recommendation.

Even though the national ecosystem for South-South and triangular cooperation varies from country to country based on the economic, political and cultural circumstances, certain elements remain similar. In the new paper, these similar elements are considered as key pillars of strong national ecosystem. They include political will, national strategy for South-South and triangular cooperation, connected actors, financing mechanism, information bases, and performance management framework.

The paper offers an overview of the currently existing national institutional arrangements set up by developing countries for South-South and triangular cooperation and highlights the importance of strong national ecosystems for successful engagement in and contribution to South-South cooperation.

Following the launching of the paper, participants addressed the following topics during an interactive dialogue:

In his introductory remarks, H.E. Dr. Bandar Hajjar, President of the Islamic Development Bank (IsDB) said that the Islamic Development Bank, which was established as a South-South multilateral development finance institution more than forty years ago, has supported South-South and triangular cooperation among its Member Countries through various mechanisms. He said that they started with technical assistance programs and, over the past few years, have developed a new modality called Reverse Linkage.Under this modality, Member Countries and Muslim communities in non-Member Countries exchange skills, expertise, and resources to develop their capacities and devise solutions to their problems. To date, the Reverse Linkage portfolio comprises numerous projects in excess of US$ 123 million.

When it comes to the concept of national ecosystems and how they can further strengthen countries’ capacity to engage in and contribute to South-South and triangular cooperation regionally as well as globally he said that this concept is fully in line with his agenda for the Bank, which aims at strengthening their Member Countries’ capacities to be part of global value chains, while engaging the private sector in their development journey.

H.E. Dr. Carlos Correa, Executive Director of the South Centre, said that SSC, as it was reflected in the BAPA+40 Conference, has increased in scope, activities, actors, and importance as a tool to achieve the 2030 Agenda. He said that it is crucial to strengthen the capacity of all developing countries. He added that South Center was very pleased to cooperate in providing empirical evidence in the framework developed by IsDB. He said that the document launched was based on surveys and visits to several countries and that it provides real evidence about how some countries are active. This document is encouraging and shows which countries have developed institutional capacities, and which have not.

Mr. Chediek noted that BAPA+40 was a celebration of the 40thanniversary of BAPA, but has also launched new challenges based on the importance of SSC vis-à-vis the new reality of the world. He said that the expended actors of SSC are not just governments but also subnational actors, private sector, think-tanks, academic institutions, non-governmental organizations. Today, he said, we also have a massive expansion of the scope of SSC: technical cooperation, trade, investment, technology transfer, and infrastructure. He highlighted that today we have triangular cooperation, and commended the IsDB for engaging in the modality. He said that the idea of the ecosystem and mandate of development of the ecosystem involving Member States of the South is critical to make the potential of SSC into a reality. Mr. Cheidek noted that UNOSSC is working with UN Agencies in preparing a UN system-wide strategy to advance the Agenda of SSC.

Ana Ciuti, Director General of International Cooperation at the Ministry of Foreign Affairs and Worship of Argentina said SSC is at the heart of Argentina’s foreign policy. She said that today, the landscape of international cooperation has changed drastically since the first BAPA in 1978 and that all development strategies must respond to new challenges. Today, it is important to know how to translate the program capacity of Southern countries into instruments aligned with SDGs; and how to assist developing countries in building new human capacity to implement national programs of SSTrC. She highlighted the import role of the High-level Committee of SSC. She also noted that for the first time triangular cooperation is in a high-level document – all Member States will now recognize that triangular cooperation complements South-South cooperation by enabling developing countries to asses a broader range of resources and expertise.

She said that the BAPA+40 outcome document invited developing countries to engage in consultations on voluntary methodologies for the country in evaluating SSTrC within UN regional commissions and relevant intergovernmental organizations.

Tarik Iziraren, UNOSSC Deputy Director for Policy and Strategic Partnership, highlighted concrete actions in support of the countries of the Global South. He said that in order to enhance the ecosystem for SSC, we need to continue to establish partnerships with other actors, in order to enhance the institutional capacities of countries. For example, he noted that UNOSSC organizes an annual Directors General Forum for SSTrC that brings together all practitioners of SSC, especially the heads of national development cooperation agencies so they can share experiences and best practices, and initiate partnerships. This was initially supported by JICA, but now also by IsDB. UNOSSC also works with other partners like UN System Staff College. That partnership allows UNOSSC to train professionals dealing with SSC. He highlighted that improving the human capacity in developing countries has been important element of the SSC historically. Mr. Iziraren added that, within the UN system, UNOSSC is in the process of developing a UN system-wide strategy on SSTrC. He said that this tool will give UNOSSC a chance to better serve the Member States and other actors in designing policy and facilitating implementation and monitoring of SSTrC.

Mr. Iziraren also highlighted another aspect that is one of the major elements from BAPA+40 document – the challenge of evaluation and assessment of SSTrC. Given the fact that the SSC is contributing to the achievement of the SDGs it is important to gather and analyze the contribution, which will give us a chance to see how we performed in our activities, and to see if SSC is effectively serving the implementation of the 2030 Agenda. Gathering data would also enable the exchanging of best practices and experiences among developing countries, and learning of how to best establish the partnerships. He noted that the Agency from the State of Palestine is doing a lot in contributing to making SSC an important element of international cooperation and encouraged them to do more. He said that this is a real example of how countries – regardless of their level of development and political situation – can do a lot in order to contribute to SSC and sustainable development in the world.

H.E. Amb. Mohamed Methqal, Director General of the Moroccan Agency for International Cooperation said that since the Agency was established in 1986 the scope of work has been enlarged. Since 1999, His Majesty the King of Morocco has made SSC a major pillar for foreign policy. He said that during the last 20 years of academic cooperation 23,000 foreign students from Africa have benefited from the cooperation through a scholarship system. The Agency capitalizes on their diplomatic network to get in contact with partners, to find the needs, and if Morocco has a local solution that can be adapted and shared with its partners. He said that the key is in trying to find the right expertise and experience. Morocco’s ambition is to institutionalize the national ecosystem network of actors on SSC by linking actors from the public sector, private sector, and civil society. He announced that the General-Assembly will launch a francophone network of national actors in SSC that will create an ecosystem where all knowledge can be shared. In his concluding remarks he said that better sharing of knowledge and better coordination allow partners to develop joint actions.

Professor Yuefen Li, Senior Advisor for the SSC and Development Finance at the South Center said that launching of the IsDB’s paper entitled “Developing National Ecosystems for South-South and Triangular Cooperation for Achieving agenda 2030 for Sustainable Development” is a very important contribution to address the theoretical and empirical deficit in studying the SSTrC. In particular the paper addresses the institutional framework of SSC. The strengthening of the institutional framework is very important because if we don’t do it, the weakness in promoting SSC could develop into a bottleneck for the future development of SSTrC. The ecosystem identifies the major elements for institutional building, she said, and also highlights interlinkages to make the system work smoothly.

Professor Li said that the paper went through country surveys and face-to-face interviews with government officials, country visits (including in Morocco) to distill first-hand knowledge and information to validate the ecosystem and what happens within it. All institutions and think tanks, she concluded, should work together to implement the BAPA+40 Outcome and also to enhance the national ecosystem for achievement of the SDGs.