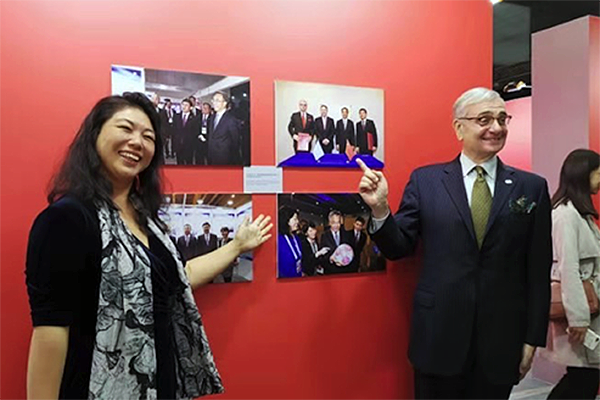 The 40-year partnership between the United Nations and the People’s Republic of China is the focus of an exhibition opening in Beijing today.

Mr. Jorge Chediek, Envoy of the Secretary-General on South-South Cooperation and Director of the United Nations Office for South-South Cooperation (UNOSSC) and Ms. Xiaojun Grace Wang, UNOSSC Deputy Director, were greeted by H.E. Mr. Zhong Shan, Minister of Commerce of China, and senior representative from the host government at the exhibition.Mr. Chediek presented a South-South cooperation pin to H.E. Mr. Zhong, which conveyed Mr. Chediek’s good will for a continued partnership between UNOSSC and the Government of China. The South-South cooperation pin, depicting a bridge joining the countries and people of the Southern hemisphere was adopted as the emblem of the 1978 United Nations Conference on Technical Cooperation among Developing Countries during which 138 States adopted by consensus the Buenos Aires Plan of Action for Promoting and Implementing Technical Cooperation among Developing Countries (TCDC).

In his opening speech, H.E. Mr. Zhong accentuated China’s commitment to working with the UN System to advance sustainable development under the framework of South-South cooperation.

“China has an opportunity to contribute to the achievement of the 2030 Agenda not only within its borders, but also globally,” emphasized Mr. Nicholas Rosellini, UN Resident Coordinator in China, noting China’s engagement in global partnerships utilizing South-South cooperation frameworks.

Close to 80 guests from the UN system and international organizations participated in the opening ceremony today. The exhibition showcases historic photos, archives and objects documenting the China-UN partnership since 1979.Recent exhibits documenting events of the Second High-level UN Conference on South-South Cooperation (BAPA+40) held in Buenos Aries, Argentina, feature the signing of the agreement between UNOSSC and Ministry of Commerce for the 2ndPhase of Global South-South Development Centre. The signing was witnessed by H.E. Mr. Hu Chunhua, Vice Premier of China, and Mr. Achim Steiner, Administrator of the United Nations Development Programme.