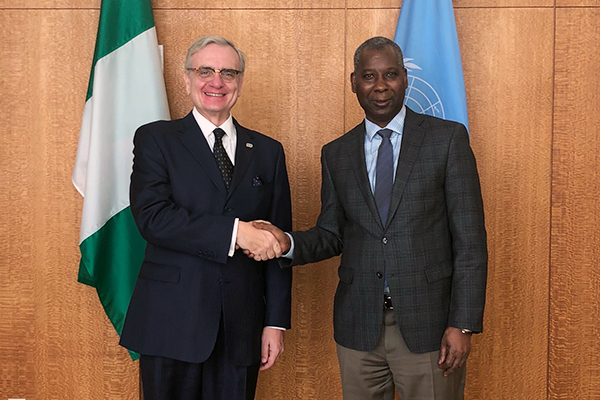 “Solidarity is the key and it is clear that we need more and more South-South partnerships,” H.E. Mr. Tijjani Muhammad-Bande, President of General Assembly, said in meetings today with Mr. Jorge Chediek, Director of UNOSSC and Envoy of the Secretary-General on South-South Cooperation.

The President of General Assembly highlighted that South-South and triangular cooperation comprise a very important part of his agenda and key priorities. He noted that, in his capacity as PGA, he was planning to emphasize the importance of South-South cooperation during the Third South Summit to be hosted by Uganda in April 2020.

H.E. Mr. Tijjani Muhammad-Bande explained that South-South cooperation and partnership between UNOSSC and the Office of the PGA would be central to work on two of his key priorities: education and climate action.

He also noted that he has a strong interest in South-South cooperation in agriculture, and proposed to organize a high-level meeting and interactive dialogue in early 2020 under the theme: “Targeting Poverty and Hunger: South-South cooperation for Rural Food Systems”. “It would be a great opportunity,” he said “to provide visibility of the impact of SSC for people on the ground.”