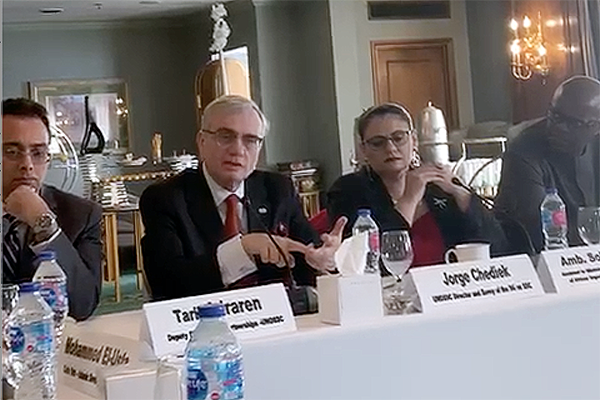 “The African Union Agenda 2063 emphasizes the value of strategic partnerships with partners of the South to further the process of development of Africa,” said Jorge Chediek, UNOSSC Director and Envoy of the United Nations Secretary-General on South-South Cooperation, in opening remarks to the African Peer Review Mechanism (APRM) Experts’ Meeting held in Cairo, Egypt 28-29 January 2020.

The meeting was held under the theme “Post BAPA+40 Roadmap: South-South cooperation for the implementation of the African Union Agenda 2063 and Agenda 2030 for Sustainable Development”.

Mr. Chediek highlighted that the BAPA+40 Conference has fostered an important momentum for South-south and triangular cooperation, and that the Global South has rapidly gained a reputation as a solution provider for sustainable development challenges. He also emphasized that Africa is institutionally and economically empowering itself, and the continent has developed unique capabilities to achieve the 2063 Agenda goals and the sustainable development goals (SDGs) on the Continent, including through South-South and triangular cooperation.

Mr. Chediek pointed out that African Union institutions such as the APRM are furthering collective actions among African countries and also with other bilateral and regional partners through South-South and triangular cooperation modalities, in order to create necessary synergies for development on the continent.

H.E. Ambassador Soha El-Gendi, Assistant to Minister of Foreign Affairs of Egypt, and Representative of the President of Egypt to the APRM, welcomed the BAPA+40 Outcome as a blueprint for the international community to leverage South-South and triangular cooperation for the achievement of the SDGs, especially on the African continent. Ambassador Gendi also expressed the commitment of Egypt to engaging actively in South-South cooperation in both Africa and other regions of the world.

The CEO of APRM, Mr. Eddy Maloka, expressed the eagerness of his organization to contribute to the efforts of Africa countries toward more dynamic South-South partnerships within Africa and also with its partners in other regions. He noted that the expanded mandate of APRM, in following up to and monitoring the implementation of 2063 Agenda and 2030 Agenda, give the Organization more leverage in promoting South-South and triangular cooperation in Africa.

Mr.Tarik Iziraren, UNOSSC Deputy Director for Policy and Strategic Partnerships, highlighted the main policy recommendations of the BAPA+40 Outcome Document. He emphasized the need for the further development of institutional capacities of African countries in order for them to tap into and leverage the immense potential offered by South-South and triangular cooperation. He pointed out the convergence of the 2063 Agenda principles and the principles of South-South cooperation – aiming to empower the countries of the South on a demand-driven basis toward achieving their sustainable development and partnerships goals.