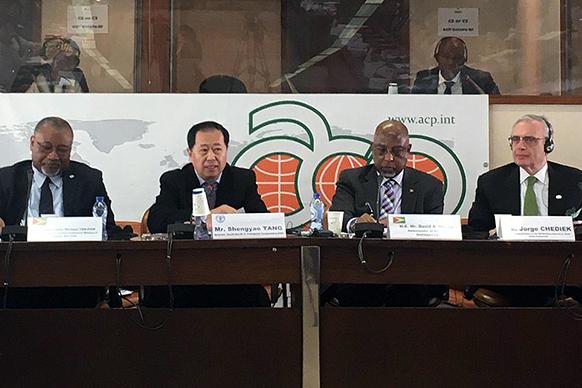 The Secretariat of the African, Caribbean and Pacific (ACP) Group of States and the United Nations Office for South-South Cooperation (UNOSSC) collaborated on a joint meeting in a series of ACP Symposia on South-South cooperation. Under the theme “Building Alliances to Strengthen Multilateralism through South-South and Triangular Cooperation” the symposium closely followed on the success of the 9th Summit of ACP Heads of State and Government in Nairobi, Kenya in December 2019 which renewed the ACP Group’s commitment to multilateralism.

The one-day symposium was an important forum to explore how to deepen and diversify partnerships and to identify specific opportunities for collaboration in key areas of healthcare, climate and environment as well as peace and security.

The Symposium, which was held at ACP House, Brussels, brought together representatives of ACP Member States and regions, experts from the Secretariat, representatives of the European Union (EU) and the United Nations (UN) and leaders from the private sector, academia and civil society. Participants focused on:

H.E. Dr. Patrick I. Gomes, Secretary General of the ACP Group of States, who will complete his five-year term at the end of February, having championed South-South cooperation throughout his tenure, considers the Symposium to be: “Important for building the alliances for South-South cooperation as a vehicle by which we can enhance our commitment to multilateralism to create the ACP we want.” Looking back at the achievements since then, he added, “We have made significant progress since the last Symposium, chief among which is the establishment of the Information Centre in Malabo – and we expect to discuss possible collaborations to take this even further forward at this meeting.”

“ACP is a strong leader in South-South cooperation, and UNOSSC looks forward to continued engagement and collaboration with ACP to ensure its members’ valuable experiences can be shared widely toward achieving the 2030 Agenda,” said Mr. Jorge Chediek, UNOSSC Director and Envoy of the UN Secretary-General on South-South Cooperation. “Exemplifying our work together is the recent joint ACP-UNOSSC South-South in Action publication, which showcases the development impact of South-South and triangular cooperation programmes in the 79 ACP member countries.”

The African, Caribbean and Pacific Group of States (ACP) is an organization created by the Georgetown Agreement in 1975. The ACP Group’s main goals centre around the sustainable development of its Member-States and their gradual integration into the global economy; coordination of the activities of the ACP Group in the framework of the implementation of the ACP-EC Partnership Agreements; consolidation of unity and solidarity among ACP states and establishing and consolidating peace and stability in a free and democratic society. For more information, visit our website at: www.acp.int.

Programme of the Symposium

Concept Note for the Symposium