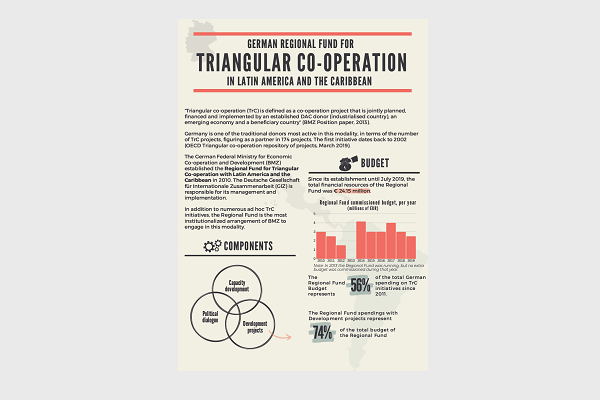 The German Federal Ministry for Economic Co-operation and Development (BMZ) established the Regional Fund for Triangular Co-operation with Latin America and the Caribbean in 2010. Since then, the budget of the regional fund represents more than half of the total german spendings on triangular cooperation initiatives. The factsheet systematizes information of the three components of the Regional Fund since its establishment until 2019: (i) capacity development, (ii) political dialogue, and (iii) development projects, with a strong focus on the latter. It is one of the outputs of the research “Beyond North and South Differences: Strengthening Triangular Co-operation for World Development“, conducted by our research associate Geovana Zoccal as a German Chancellor Fellow of the Alexander von Humboldt Foundation. The project aimed at analysing triangular cooperation, with a strong focus on the German case.